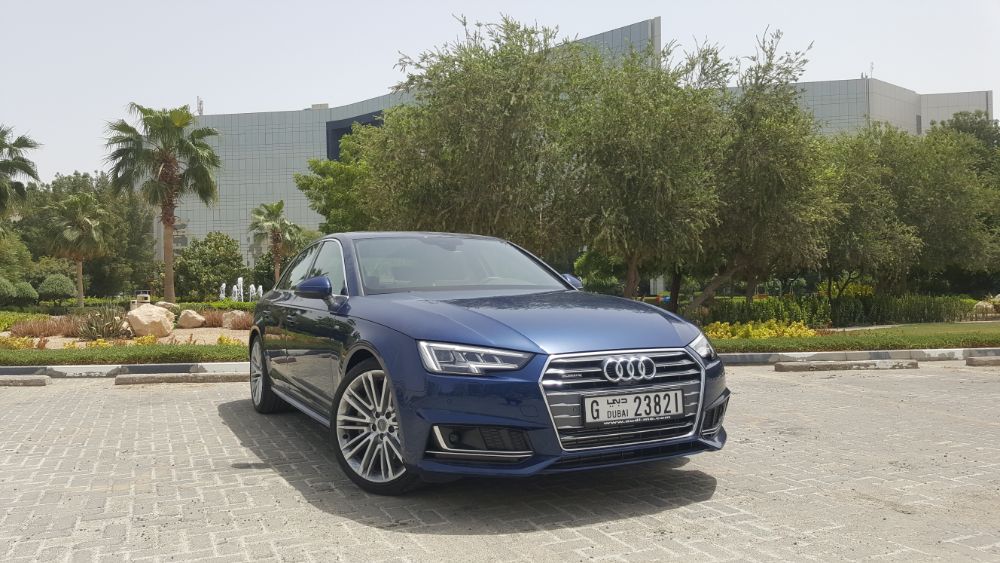 Audi have always been known for their all wheel drive Quattro systems made famous by their impeccable rally heritage. In fact, from 1981 to 1985, 23 rallies were won in Audi Quattro cars as well as Audi also taking 6 consecutive World Rally Championships (WRC). The Audi A4 was first introduced in 1994 and has since been a strong frontrunner in its category of entry level luxury. The first Audi A4 succeeded the Audi 80 and has always followed the front engined, front wheel drive format as well as the Quattro all wheel drive system available as an optional extra. 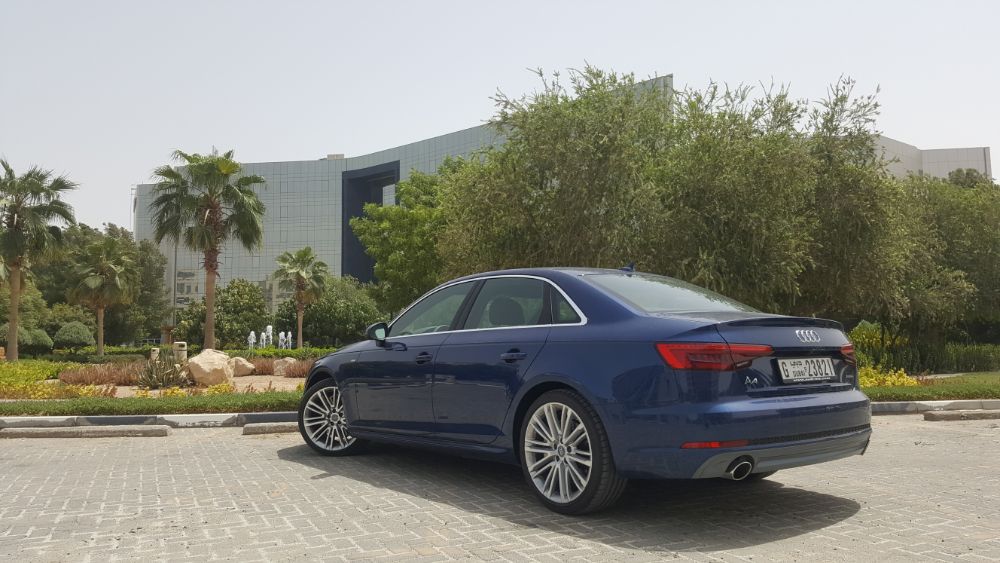 The exterior of the all new Audi A4 is modern, the revamp has been drastic and in my opinion is the best looking A4 to date and you can even go one further and apply an S-Line bodykit which improves aggression and stance making the car look like it doesn't belong in the entry level luxury market but the entry level sports car segment. The Audi matrix LED headlights have been designed beautifully and look fantastic, the quality is right up there with the best of them.

There is a mix of curves and straight lines on the new body, the back of the car is predominantly smooth curves, especially around the boot and spoiler. The front of the car is definitely more aggressive with the large front grill, angled headlights and straight lines throughout emphasizing the width of the car. Even though the body shape and style has been completely overhauled, its one we welcome. What a good looking car. 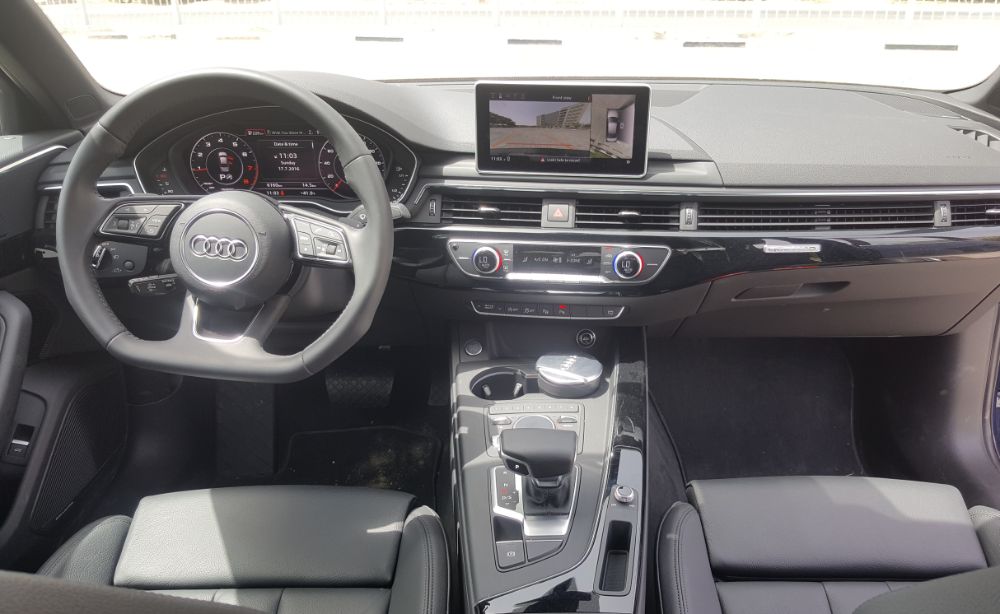 My initial feeling when getting inside the all new A4 for the first time was that the cabin is stunning, filled with high quality features such a solid aluminium buttons and knobs and draped in luxurious leather it really is a very relaxing place to be. The steering wheel feels like it's straight out of the Audi R8, albeit missing the Start/Stop button its sporty yet really comfortable. The cabin is minimalistic, now usually this would equate to boring but it doesnt, its elegant and beautiful.

In any other country the metal buttons and knobs would be perfect, unfortunately in Dubai the heat means touching those controls for more than 1 second could mean losing your fingerprints. On the other hand because the AC is phenomenal in the GCC Spec A4 the car cools very quickly. The last downside I experienced with the interior in the A4 is the gear selector, I didn't feel like the shape was very ergonomic and the reverse button is slightly awkward to get a hold of.

The rear seats have lots of space and are just as comfortable as the front seats and it is a genuine 5 seater not one of those uncomfortable 5 seaters. The rear passengers get plenty of headroom as well as rear facing air conditioning, which again works wonders. 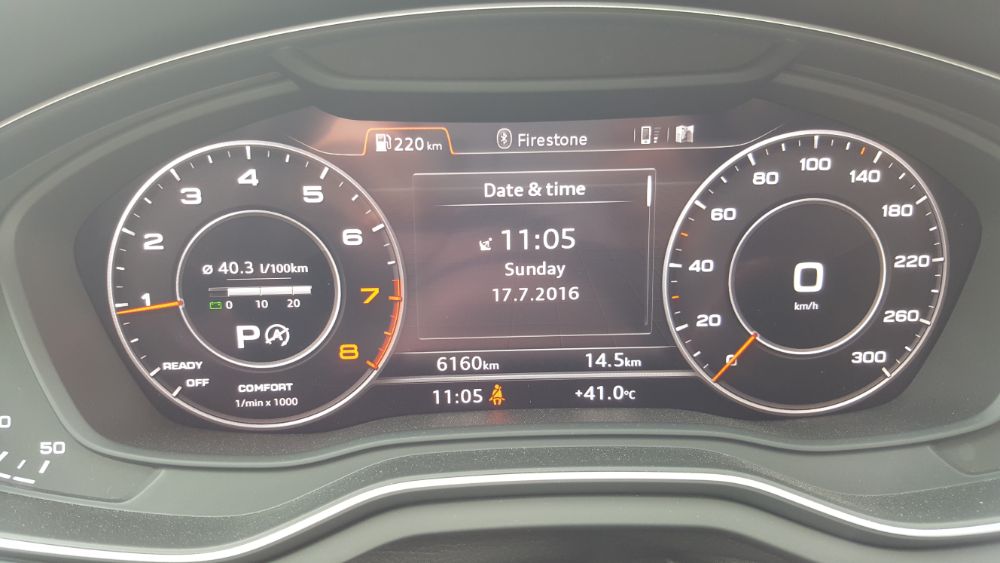 The 2017 Audi A4 comes with a huge array of brand new technology and assists. The assistance package comes with 360 degree cameras, Audi side assist including Audi pre sense rear, cross traffic assist, exit warning, park assist and parking aid at the front and rear of the car. All of those systems work very well and really do make driving less stressful. I did try the park assist and even though it was able to get me out of the spot, didn't give me enough confidence for that system to be used on a frequent basis.

The all new MMI and virtual cockpit are awesome. The MMI system is displayed on an 8.3 inch monitor has the touch sensitive capabilities in the scroll wheel to zoom in and out and write characters for the Sat Nav or Audi phone. The system also has the ability to customise nearly every aspect of the technology package built into the car it's also quick and very easy to maneuver through.

The virtual cockpit is my favourite feature on the new A4 with its 12.3 inch LCD screen that displays the most important information in super high resolution and in great detail. You can minimise the speedometer in order to have the Sat Nav enlarged or vice versa. I honestly think this is where a cars in the future are heading, it’s just Audi have got their first and that one of the things that separate Audi from the rest.

The Bang & Olufsen 3D sound system is absolutely incredible, honestly the best in car speaker system I have heard to date. You really do feel like you're at the concert. It has massive depth of sound and really envelops you in the music, exquisite.

The new Audi smart phone system integrates Android and iOS mobile phones into the MMI interface. You can also place your mobile on top of the centre storage compartment to activate wireless charging. 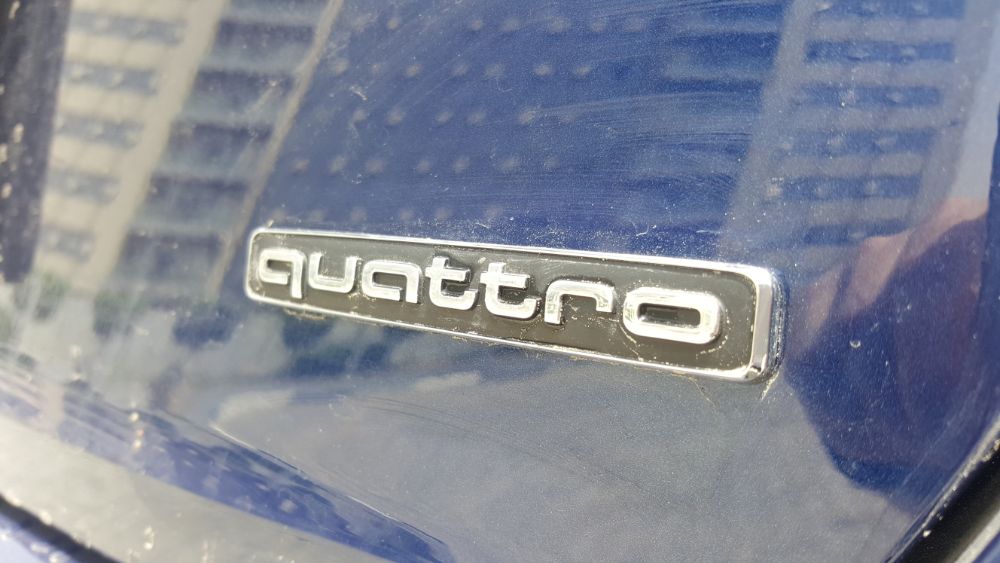 The all new Audi A4 is powered by a 2.0L turbocharged 4 cylinder mated to a 7 speed s-tronic transmission. All of this may not sound like a lot when you mention the price, but it's the furthest from what from that. This engine is fantastic, it's zippy and yet incredibly efficient and has a feul efficiency of 6.2L/100km. The A4 will complete the 0-100kph sprint in an impressive 5.2 seconds and it'll get even closer to the 4’s if you engage the launch control. This gives time for the turbo to build pressure, once you let of the brake, it's off. Almost all of the power comes on straight away with over 370 NM of torque available from 1600 rpm.

My favourite feature on the 2017 A4 is the quattro system, it is honestly mind bending, the speeds at which this car can go round corners is bonkers. Audi have got the ride down to a tee with the 2017 range and I was thoroughly impressed.

The only downside I can come up with is that the steering doesn't have a lot of feel in it and lacks feedback. The A4’s party trick has to be its ride quality, at 100kph sound from the outside world doesn't slip into the cabin with ease, it's eerily quiet and can hold its own against that of a Rolls Royce at the same speed. That's an impressive feat for an entry level luxury sedan, most of this boils down to the A4’s drag coefficient which stand at 0.27. 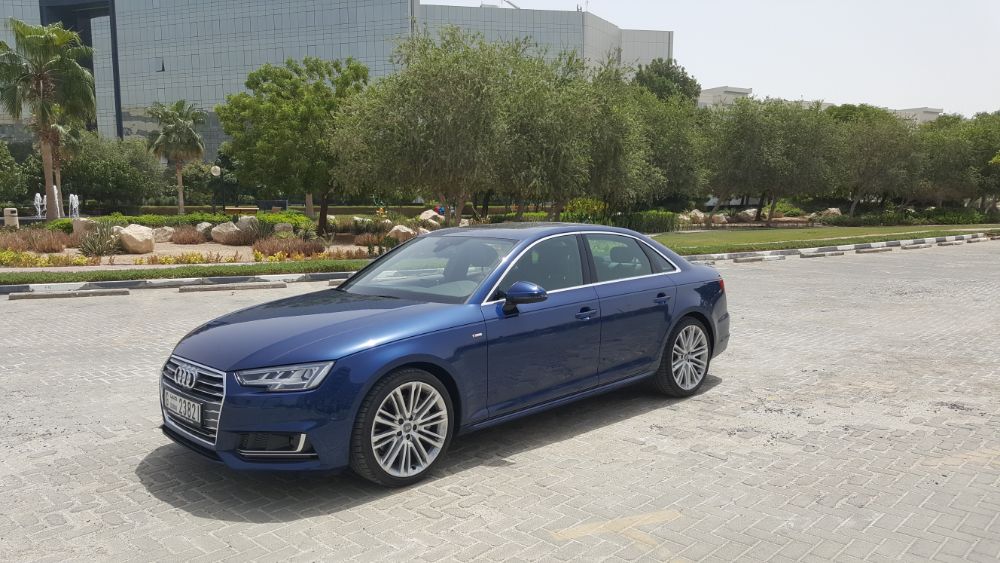 A very well designed car that excels in its category, the technology in the A4 really steps this car up to the next level with features you would expect from only the most expensive luxury cars in the market.