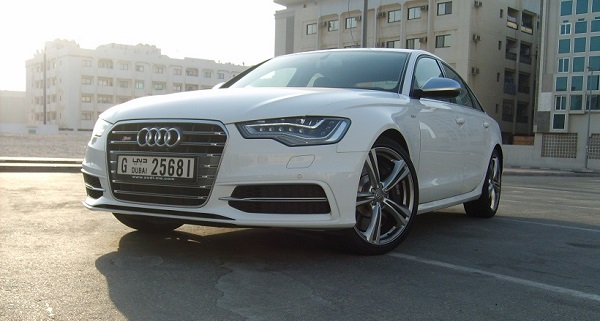 The Audi S6 is one rung up on the A6 ladder from the standard car. You still get all the features of the standard A6 but this car has a trick up its sleeve – a brand new 4.0 twin-turbo V8 that promises to change everything you ever thought you knew about the A6.

The Audi A6 has always been a bit understated when it came to appearances. Most buyers today look towards the smaller A5 or the larger, but pricier A7 so as to be able to have Audi’s legendary build quality in a car that actually looks interesting.

The S6 does not move the game on very much for the range though. Aside from S-line specific alloys (which definitely look plainer than some of the nicer alloys on the standard A6), a subtle change to the front bumper and quad exhausts incorporated into a mini-diffuser at the back, there’s not much else different. It could very well be mistaken for the standard car.

You will find the ‘S’ badge on the front grille and on the boot lid and some ‘V8 T’ badges on the flanks. These along with the ‘S6’ brake callipers are the sum and substances of exterior changes.

Is that a bad thing? Well, that depends on your perspective and what you want from your fast saloon. If you want it to be showy and to make a statement, this is definitely not going to be your cup of tea. However, if you want a sleeper, all the subtleties of an ordinary saloon but with enough oomph to kill a good few sports car at the traffic-light grand prix, you could not find a better Q-car than the Audi S6.

In our test car’s Ibis White, the car does look handsome and well proportioned. With the new LED lights, it does have quite a broody look about its face and I reckon it would have a subtle but menacing appearance if chosen in a darker shade. 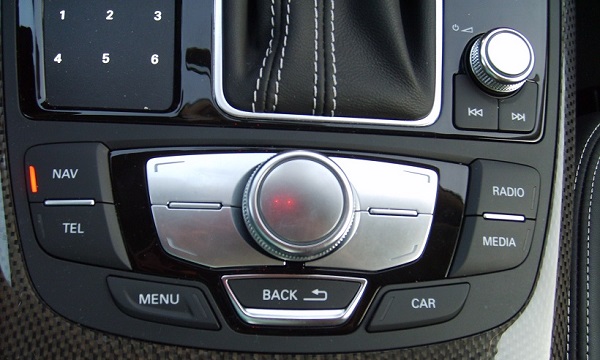 It was never in doubt that this is where the S6 would excel. Audi’s are widely praised for their interiors and the S6 is not only another good example, it's one of the best.

The equivalent Mercedes and BMW, the E500 and 550i respectively, are great cars. There is no questioning the quality of their interiors as well. But the fact remains that in either one of them, you could easily mistake the interiors for a base model, an E200 or a 520i. In the S6, there’s no mistaking what you’re in.

S6 badges adorn the dials – and the speedometer and rev gauge look expensive and exquisite. The seats are covered in diamond quilted leather and are extremely comfortable. They hold you in place, especially while pushing on through twisting roads but never make you feel uncomfortable. And every other surface is covered in carbon fibre. Not the fake carbon fibre stickers, oh no. This is the real stuff gentlemen!

At AED 299,000 basic (which includes a 3 year warranty and 5 year service contract), the car has all your standard features – from a premium Bose system, navigation, Audi’s famous MMI infotainment system, cruise control, electric sunblind at the rear, reverse camera and sensors all around, electric boot lid, ambient lighting, glass sunroof, memory sports seats and a whole lot more. All of it is extremely easy and very intuitive to use. Optional on our test car are soft touch close for all the doors and a surround camera system that gives you a 360 degree view of the car. This takes the price of our test model up to a bit over AED 315,000 which is still quite reasonable.

The paddles behind the steering wheel are quite tiny meaning you’re hands need to be placed quite precisely or you’ll only be reaching for air when you want a gear change. Aside from this though, the driving position is spot on. Many modern cars have steering wheels that adjust for rake and reach but sometimes, one or the other is not quite enough. In the Audi, there is a huge degree of adjustability which allows you to choose the exact position you want to be in.

For the asking price, the interiors alone do the car justice. This feels a lot more expensive on the inside than the price tag suggests.


420bhp. 550Nm. It’s a little hard not to expect magic when you hear numbers like that.

On our first encounter, I was blown away. You see, most quick saloons today boast big numbers. But the way Audi puts its power down is nothing short of staggering. The Quattro system (four wheel drive) means the tyres will not even chirrup when you put your foot down. All that power is converted into instant forward motion. 100kmph comes up in about 4.5 seconds. That’s as fast as a Porsche 911 and Aston Martin V8 Vantage. If you are not ready for it, you can actually get whiplash with the way this car lunges for the horizon.

The V8 under its bonnet is a slight detuned version of the engine used in the new Bentley Continental GT V8s. This engine is what this car is about. If the interiors of this car justify its price, the engine does the same again. Mated to a dual clutch S-tronic transmission, the car does everything you ask from it – pootle around town slowly or cruise down the highway or put your foot down and experience Armageddon.

Turbo-charged engines are usually associated with turbo-lag, the time it takes for the turbos to spool up and actually delivery power once you’ve put your foot down. However, it appears that no one told Audi about this phenomenon. The car pulls away from idle with almost no hesitation. You can feel the kick of the turbos from about 1500rpm but as you have a V8 lugging you around, you are never left wanting.

I could almost criticize the Audi for being too fast. As you burble around town, you can always sense that something is simmering underneath the hood and there is just no way of finding out its true potential within city limits – at least not if you want to stay out of jail. This could get a bit frustrating after a while as your right foot get ever itchier to mash that throttle into the carpet.

Audi’s MMI system allows you to set-up the car. You have different settings for the Engine/Transmission, the steering, the suspension and the exhaust note (select dynamic for the latter and the exhaust note is artificially enhanced in the cabin – gimmicky but it sounds nice with a deep growl permeating through the cabin). I personally chose Dynamic setting for all but the suspension set up, which I left in Auto. The car rides with a distinct firm edge to it. Putting the suspension in dynamic is akin to driving a car without any springs. Harsh is an understatement. However, left in Auto, the car does its best to soak up most undulations well and avoids being crashy through all but the worst of road irregularities.

So now with the car set up to my preference, you decide to put the S6 through its paces and this is where it falls apart quite a bit.

Throw the S6 into a corner at pace – steering having a well judged degree of heft but not much in terms of feel - and all you get is understeer. Take 2. Approach second corner, slow down, turn in to corner and try putting down power more gradually and you get, wait for it, more understeer. The car just isn’t willing to play ball. That Quattro system needs more of a rear bias so that you can get the car to play but it just doesn’t happen with the current set-up. There is just no deftness to the handling of this car. This becomes more frustrating as smaller light-weight sports-cars with half the power or even well sorted hot hatches will fly past the S6 on twisting roads. Makes you wonder – is the S6 just a straight line monster? There is a good deal of grip coming out of the corner, but entering and driving through the corner is deeply frustrating. This is where a BMW excels with their magical balance and tendency to oversteer. It would completely depend on personal preference, but if you have any inclination towards a car’s handling characteristics, the Audi will let you down.

The accolade for the S6’s weakness is still not the fun-crushing understeer – it’s the brakes. I’ve always felt a car is as good as its brakes. The S6 gets up to extremely illegal speeds very quickly and you want to be able to haul the car down just as quickly. However, the brakes are absolutely lifeless in terms of feel and the car just doesn’t stop with conviction. On several different occasions, I found myself almost willing the car to stop as the brakes did nothing to inspire any confidence. This coupled with the understeer led to one of the most disappointing spirited drives ever.

It’s not to say the car is utter rubbish. Daily driving is done without skipping a beat (just remember to leave the suspension in auto – comfort is too floaty and devoid of feel and dynamic will rattle the fillings out of your teeth). It cruises down the highway quite well too shifting up to 7th gear quickly enough and cruising along at highway speeds at 2500rpm. It goes about its business very well. The S6 is just more of a car to be driven up to and at 7/10th’s rather than 10/10th’s. Push hard and there is no reward in doing so.

As a fast Audi A6, the S6 makes a convincing argument. The interiors are exquisite and it always feels like something special each time you get into it. The engine is God-sent and the ample power and torque and the ease of its accessibility makes driving a doddle. Overtaking has never been easier.

However, even though the car could monster full-fledged sports cars in a straight line, it will be eaten up by cars of much more humble numbers through corners. The Quattro system may provide all-weather assurity, but it’s not exactly an incentive in our part of the world where the weather doesn’t cause great treachery to our road conditions.

If you want something that feels special – a cut above your average premium saloon – and that can really shift, the S6 is a great buy at a price that almost feels like a bargain when you first put your foot down. But don’t expect sports-car handling as it will only lead to disappointment.