The BMW X7 is a car for those with big families and fat wallets. Its main rivals are the Audi Q7 and the Mercedes-Benz GLS, and today we’re going to find out if the big German SUV you see above is worth its 537,000 Dirham price tag. 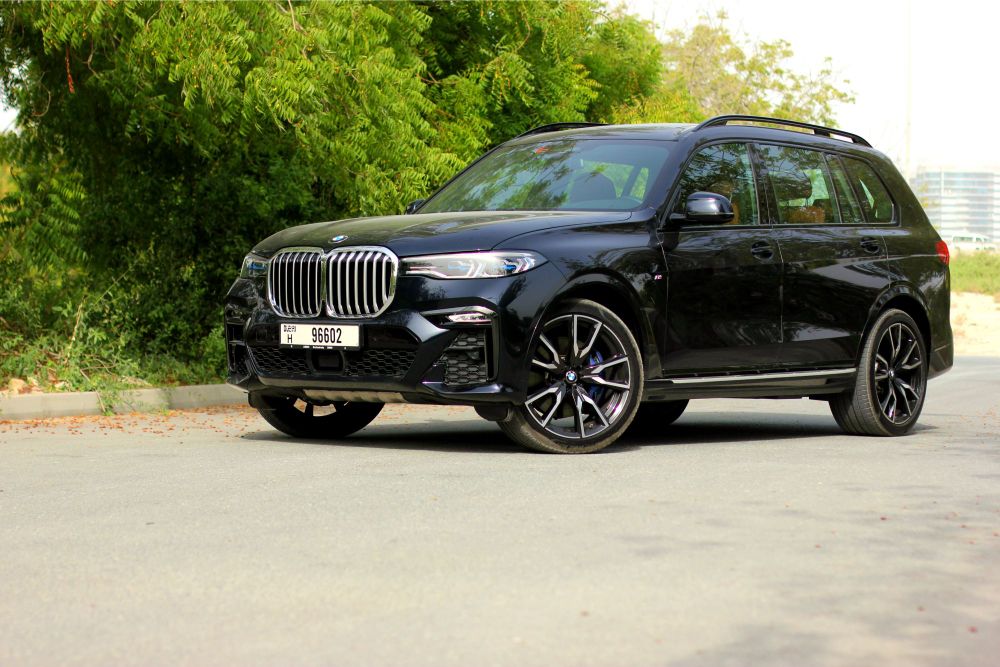 Twelve years after Mercedes-Benz launched the GL and fourteen years after Audi launched the Q7, BMW has finally decided to dip its feet into the full-size luxury SUV segment. The handsome X7 has been a long time coming, and from a design perspective, it doesn’t disappoint.

The most striking angle of the X7 is the front, with the huge double kidney grille making up almost all of it. What’s surprising is that while the oversized grille looks horrendous in photos, it doesn’t look half as bad in person and suits the size of the vehicle. More than just being big for the sake of being big, it’s also quite intelligent. The small vents inside the grille open and close automatically, either to cool the engine down or improve aerodynamics. 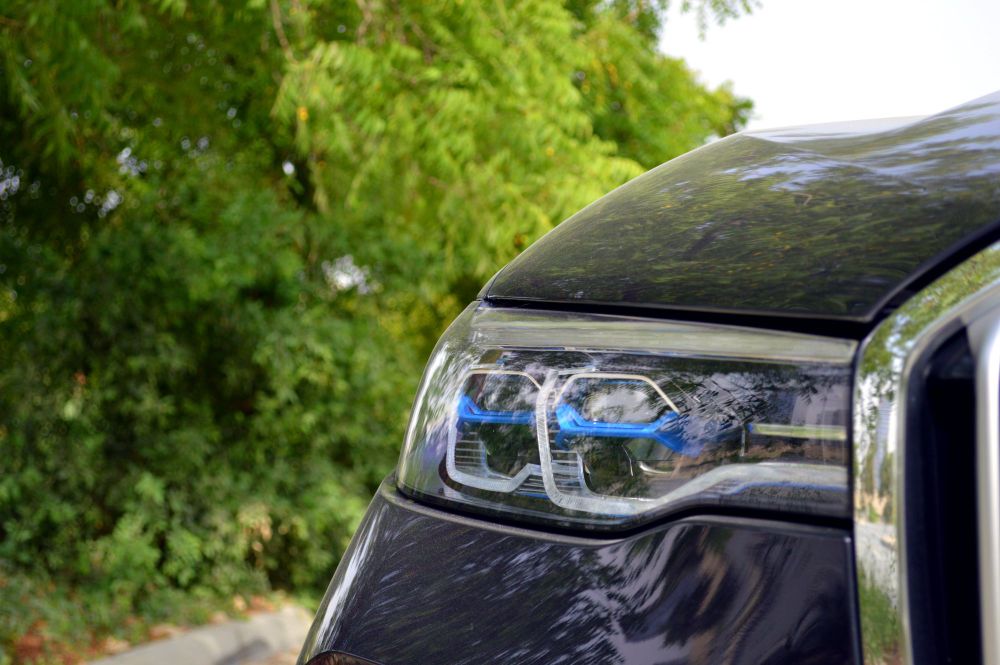 Now I’m sure many of you are questioning why the headlights are so sleek and narrow while everything else seems oversized, and that’s because BMW has used its newest Laser light technology. Brighter than xenons and LEDs fitted to most other cars in the market, the laser lights illuminate objects up to a jaw dropping 600 meters away.

The beautiful color you see on this test car is called Carbon Black Metallic, it’s a unique blend of black and navy blue but if you don’t quite fancy it, there are eight other colors you can choose from. With this car receiving the ‘M’ Sport package, it also gets different bumpers, huge 22-inch alloy wheels, and the chrome pieces such as the roof rails and window lining have been converted to black. Overall, it’s a handsome car and isn’t just a stretched X5 as many thought it to be. 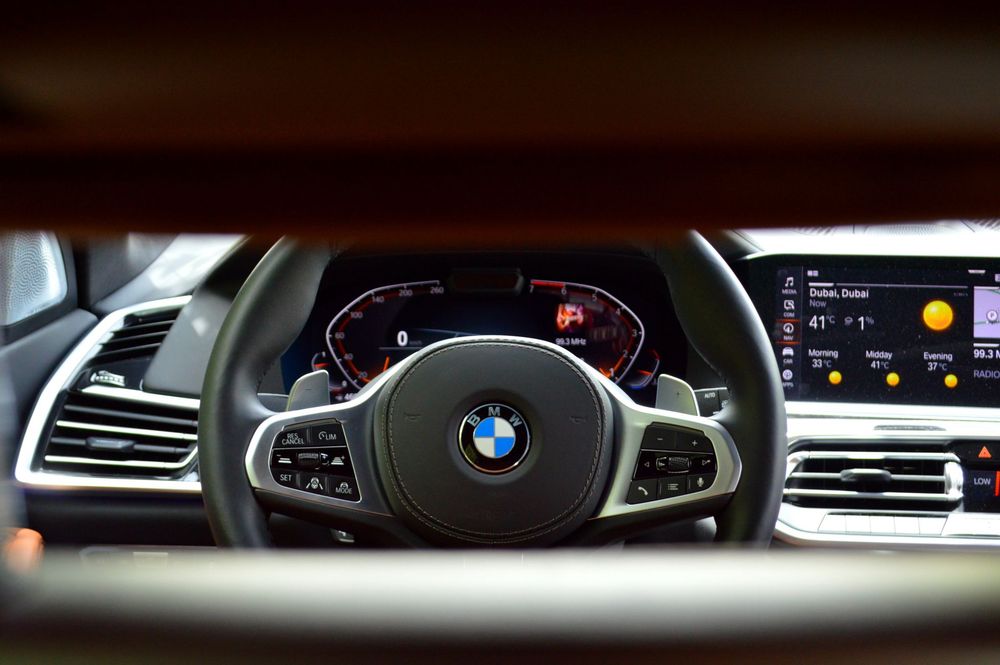 Now before jumping into the details and telling you all about the interior of the X7, I’m sure there’s many of you reading who are thinking, well if I had a lot of money and a big family, I’d just go out an buy a Range Rover. But you see the X7 has two big things the Range Rover doesn’t: two extra seats. That’s right the X7 is a 7-seater SUV and a great one at that.

Amazingly designed and put together exceptionally well, the cabin is a special place to be. There’s Alcantara on the headliner, soft leather on everything from the seats and steering wheel to the dashboard and door panels, and glass on the engine starter button, gear shifter, iDrive controller, and volume control knob. 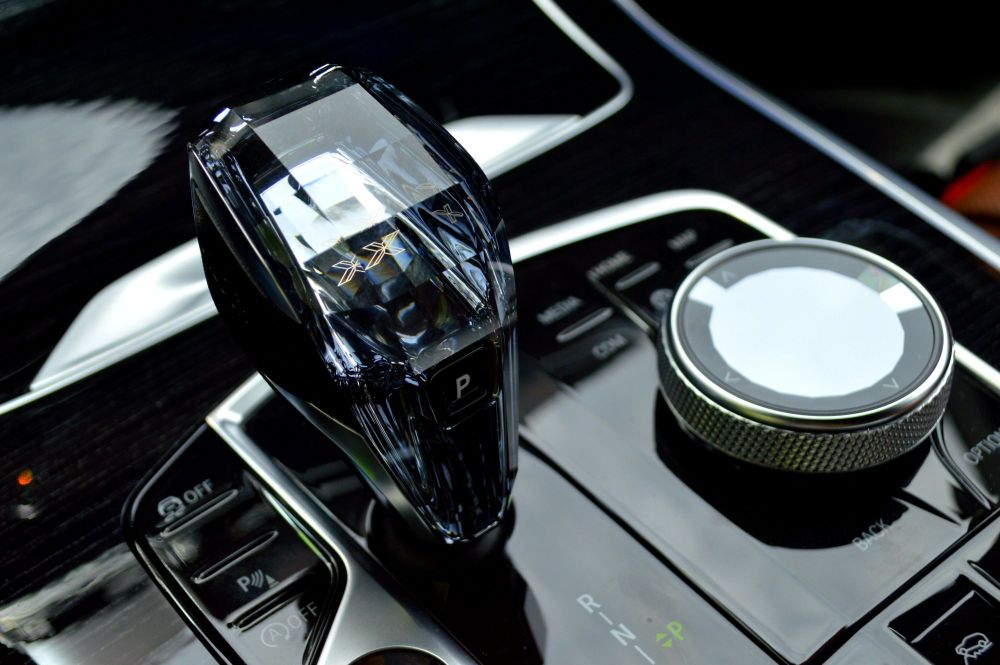 In the second row, the X7 treats its passengers like royalty with an abundance of headroom and legroom, and even allows them to recline the seats for added comfort. There’s privacy shades on either side, high-definition entertainment screens, and extremely soft pillows on the headrests that I can almost guarantee are more comfortable than the ones you sleep on every night.

You might be thinking that the X7 is just a namesake 7-seater SUV and that the last row isn’t really usable by anyone who’s more than 4-feet tall, but that isn’t the case. Firstly, accessing the last row is really easy and of course, it’s a completely automatic process. You simply press one button to move the second-row seats out of the way, and then you have more controls hidden near the wheel arch to bring the third-row seats out of the floor. 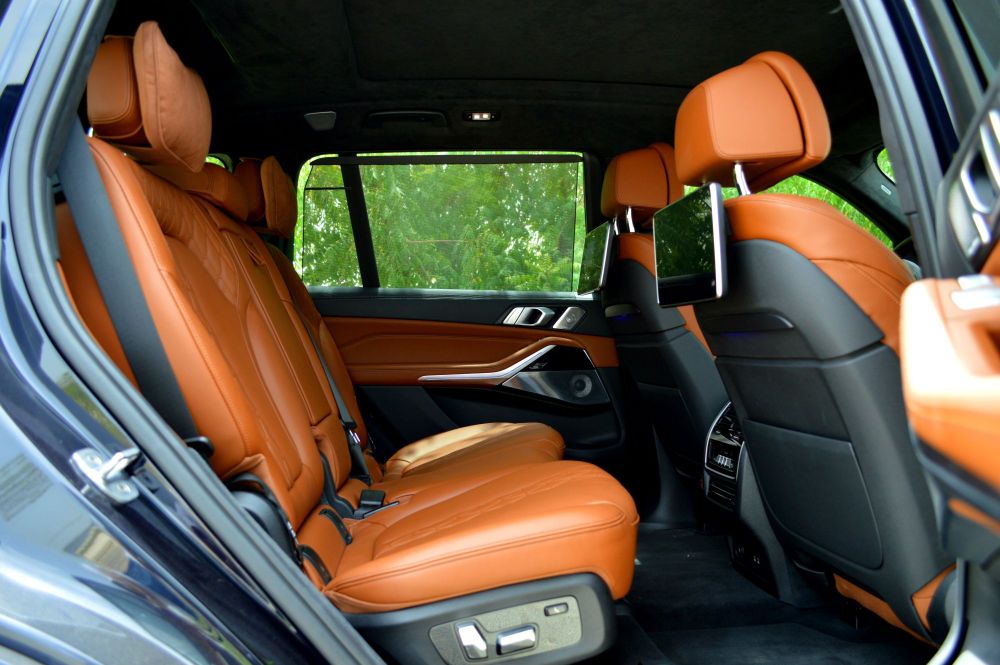 In the third row, you’ll be amazed by the amount of space on offer and once you start looking around, you’ll notice Type-C USB chargers, cupholders, and a couple of cargo hooks. Speaking of cargo, let’s go over the boot space. With the third-row in use, boot space isn’t great and measures just 340-liters. But simply press one button called ‘MAX CARGO’ and the X7 automatically folds the second and third row seats out of the way, opening a huge van-like 2,560-liters of storage. If you’re wondering how that matches with its rivals, it’s way, way more than the Audi Q7 and just a tiny bit less than the Mercedes-Benz GLS. 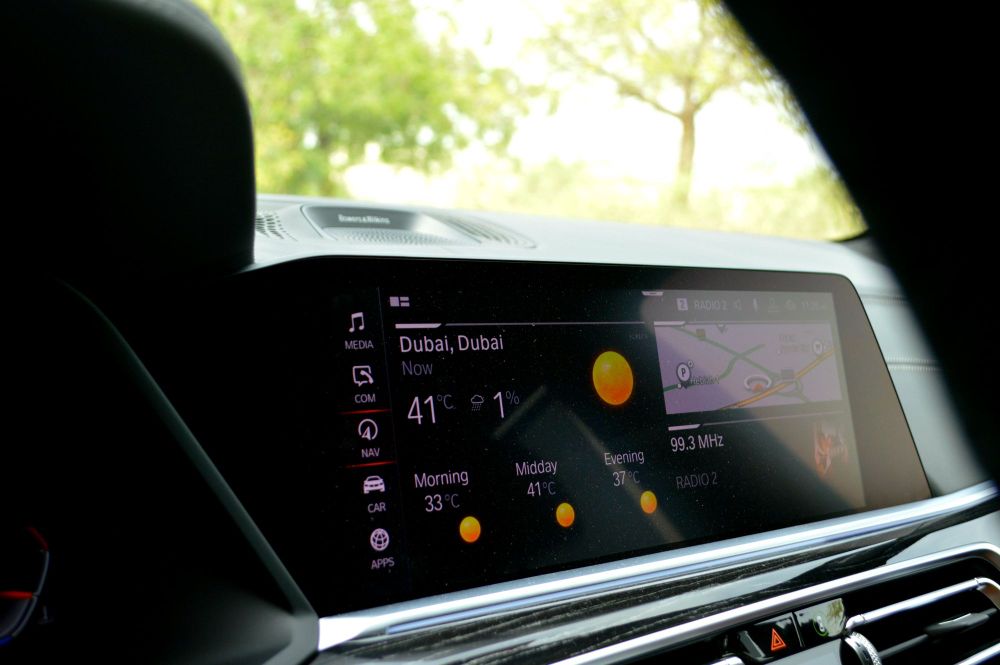 Being the brand’s flagship SUV, you’d expect the X7 be armed with some insanely cool features and it is, but before telling you about those, let’s brush over the more regular features very quickly. It’s got 20-way power adjustable seats that come with a long list of massage options, a 12.3-inch infotainment screen with Android Auto and Apple CarPlay, a wireless charging mat for your phone, and soft-closing suction doors for the ultimate luxury experience.

Now, insanely cool feature #1. Many cars come equipped with a panoramic glass roof, but the one fitted to the X7 is very different. BMW refers to it as the Sky Lounge and essentially what they’ve done is that they’ve fitted microscopic LEDs inside the glass panel. In the daytime, it’s completely clear but after sunset, the entire roof illuminates in the color you’ve selected for the ambient lighting system – it’s genius. 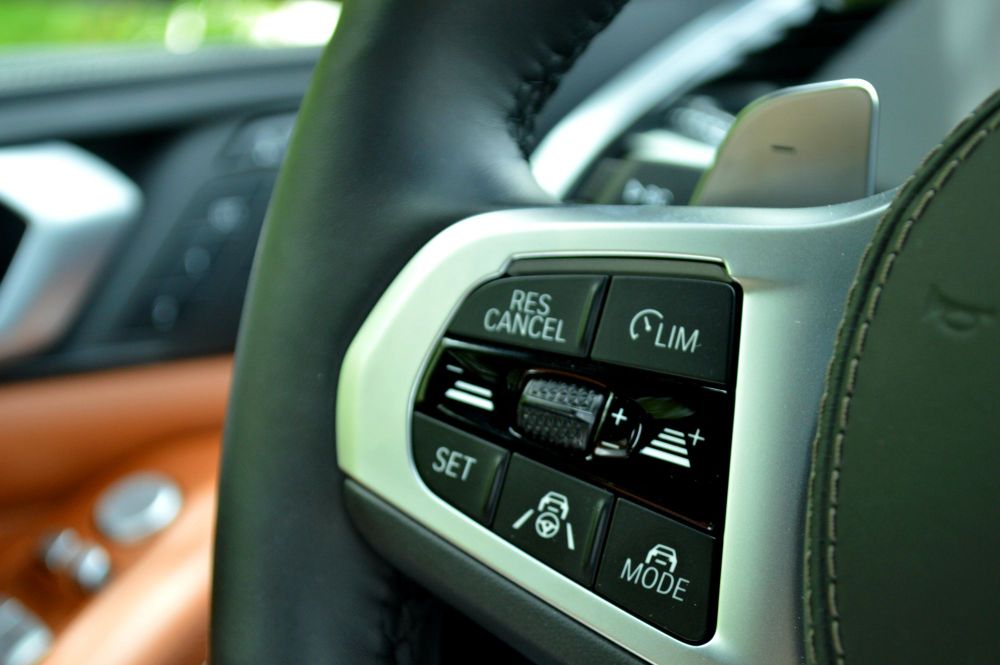 Insanely cool feature #2: If you’ve ever parked your car in an extremely narrow space, then got out, and asked yourself “how the hell am I got the car out of there?!” then this feature is for you. The Back-Up Assist fitted on the X7 remembers the exact path you took to park the car and automatically brings the car out for you by completing the same set of steps in reverse order.

Insanely cool feature #3: Many cars nowadays come with a voice command system, but it usually doesn’t work very well. In the X7, not only does it work every single time, but the best part is that you don’t need to memorize any commands, you simply have a conversation with it. For instance, you can say “Hey BMW, I’m feeling hot” and it will automatically adjust the A/C temperature for you. 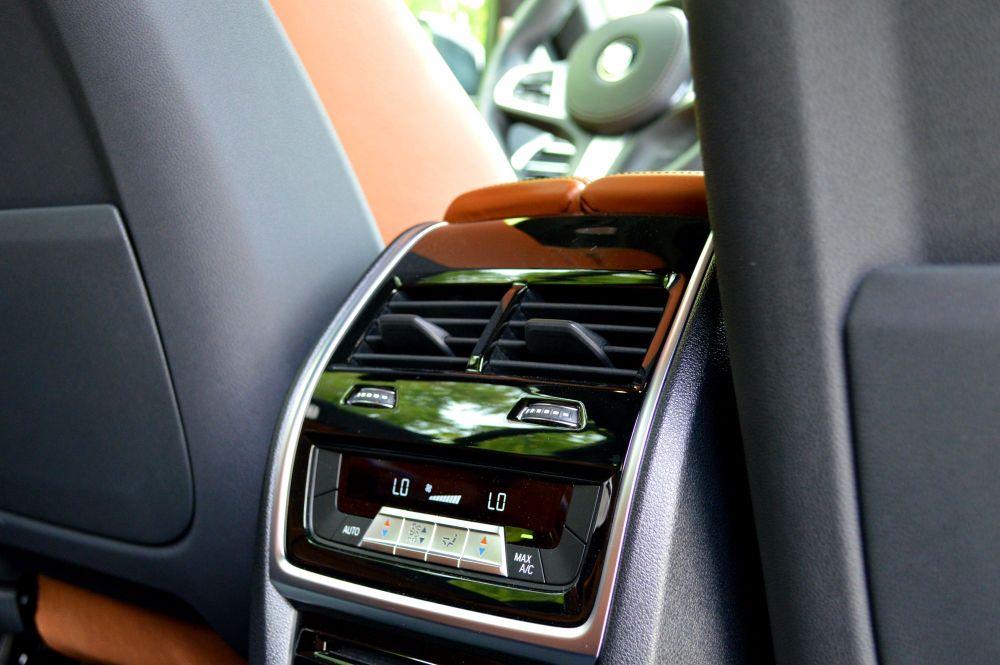 Insanely cool feature #4: Heated and cooled cupholders. Yes, you read that right. If you want to keep your cup of karak chai warm while your friend or partner wants to keep their can of Pepsi freezing cold, then it’s definitely possible in the ultra-cool X7.

Insanely cool feature #5: The BMW X7 is possibly the ONLY car in the world to come with a five-zone climate control system. What does that mean? It means the driver, front seat passenger, those in the second row, and those in the third row have completely independent A/C controls. They can set the temperature and fan speed exactly how they like it, without affecting anybody else. 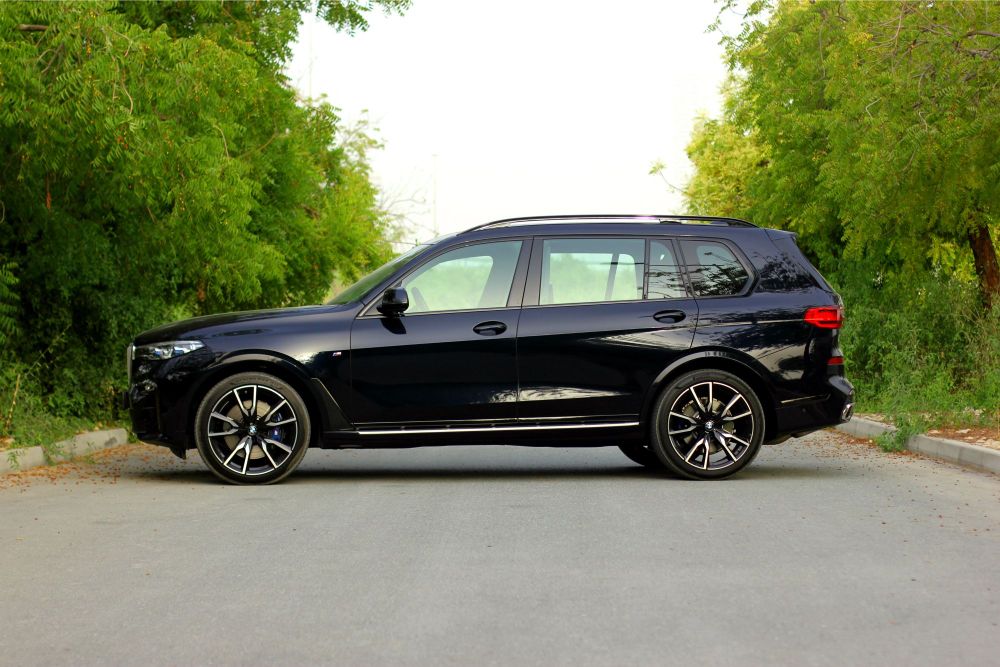 Now that we’ve highlighted some of the X7’s party tricks, you’re probably beginning to understand why it costs over half a million Dirhams. The truth, however, is that the X7’s best feature, is the way it drives.

Although it packs a 4.4-liter twin-turbo V8 that produces 462 Hp and 650 Nm of torque, the X7 really isn’t about speed or the numbers it produces. The X7 is all about luxurious cruising with the family and that it does magnificently. 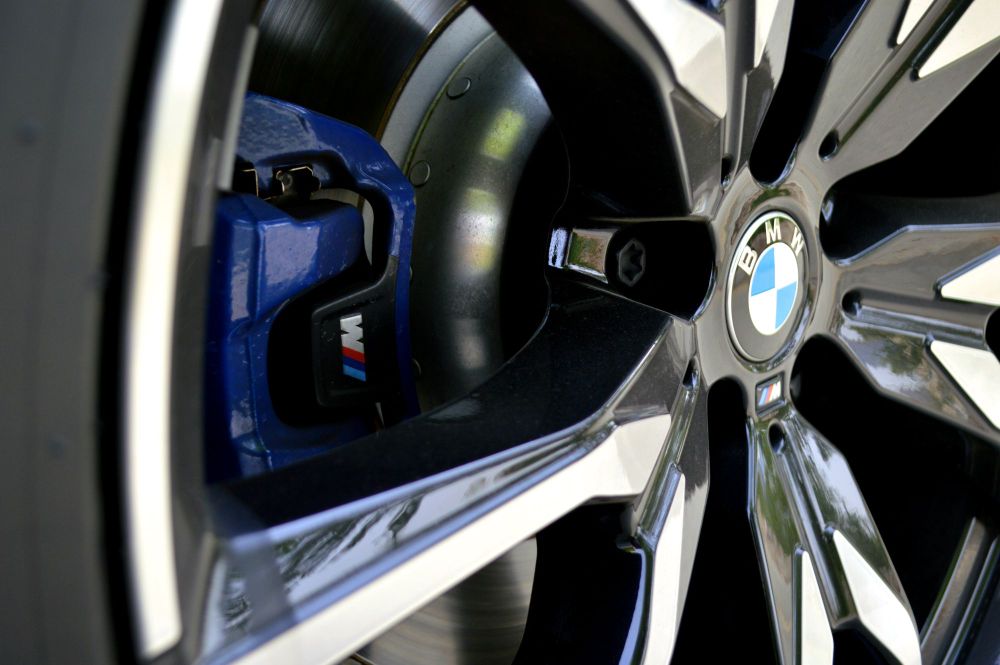 With double glazed glass and noise cancellation technology, it’s extremely quiet and to take luxury to the next level, the suspension is extremely soft, (almost like it’s made from marshmallows) meaning you never really feel any bumps or uneven patches in the road. 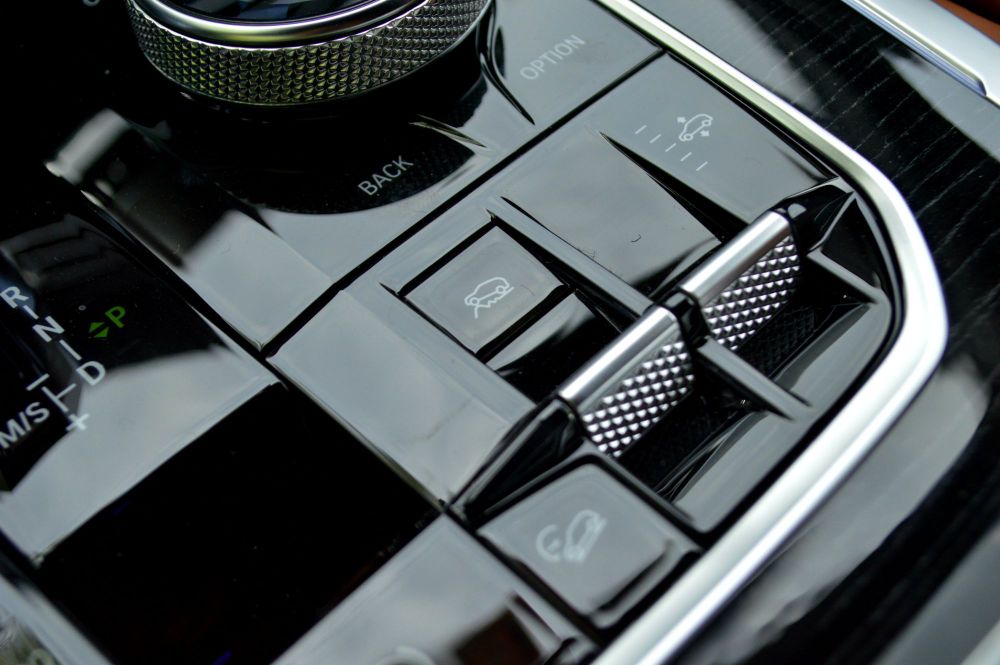 Being an urban-friendly SUV, the X7 comes with three main driving aids: Speed Limiter, Adaptive Cruise Control, and Assisted Driving. Simply put, the X7 can drive itself in slow moving traffic up to speeds of 65 km/h. You take your hands off the wheel and your feet off the pedals, and the X7 will accelerate, brake, and stay within the lane for you.

But there is a catch. It will only do so if you’re looking ahead and paying attention to the road. If you start fiddling with your phone or decide to play a game of Uno with your passengers, the X7 will ask you to take control of the wheel and drive yourself. How does it know? Because within the instrument cluster are cameras tracking your face and all its movements. Yup, it’s Sci-Fi stuff. 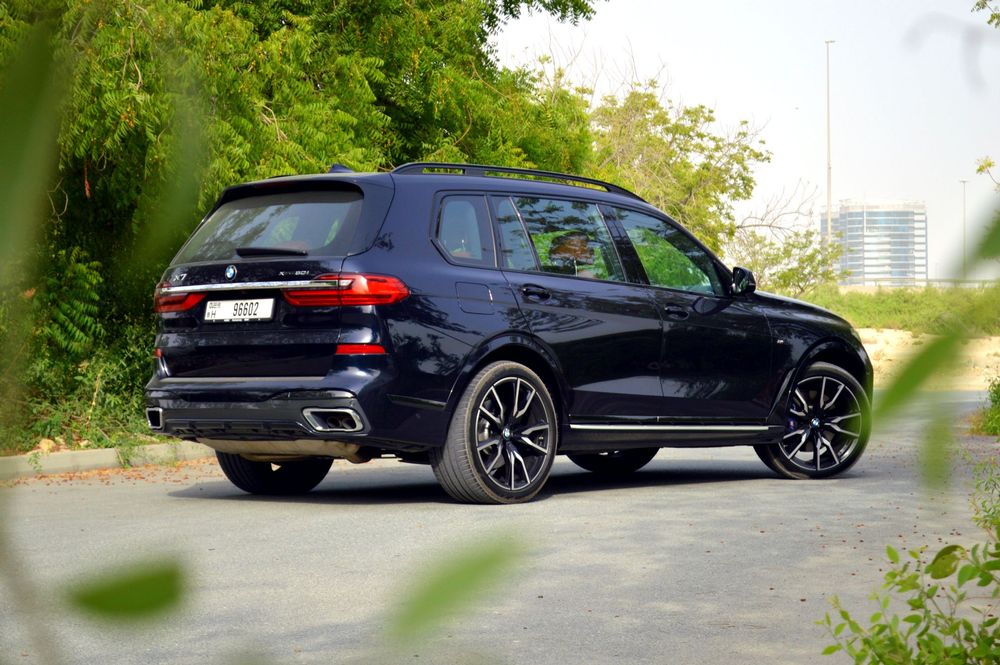 The BMW X7 is the seventh SUV in the brand’s line-up and what an SUV it truly is. If I had to use just one word to describe it, I’d use “innovative” and that’s because the X7 pushes the boundaries of what we expect a car to be. It is indeed a flagship SUV and a great one at that!