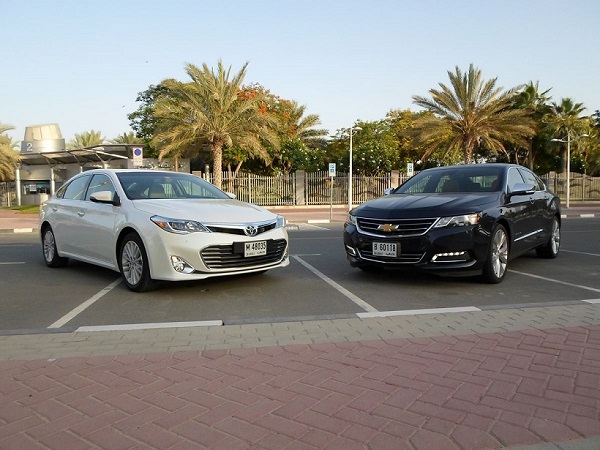 When looking into buying a large premium sedan, customers can be left overwhelmed by the number of choices available. My friend Jimmy Sadri and I had the keys to Toyota’s flagship, the Avalon and Chevrolet’s flagship, the Impala. It was time to put them up head to head and find out once and for all which is the better car!

The Impala flaunts a beautifully sculpted hood and those Camaro-esque headlights surely make it look more aggressive. This is a handsome car, it's large but not overbearing, sculpted but not just for show. Let’s not forget the massive 20” rims which look stunning on their own. The character lines make their mark in an understated aggressive fashion.

The Avalon isn’t a bad looking car but it's not that good looking either. For one, it still reminds you of the Camry and doesn't really stand out with it's character lines. A few elements such as the LED’s integrated into the headlamp cluster and a much better looking rear end gave it an edge over the Impala but that’s where it ended.

The Impala was fitted with a 3.6 litre V6 engine that produced 305 horsepower and 356 Nm of torque. Impala stands out in the cruising department. The car cruises with noticeable smoothness, rarely passing 2,000 rpm in regular driving. Having said that, the large wheels reduce the smoothness somewhat as every bump causes the wheels to thump, giving you a more sporty feel rather than a smooth luxurious feel.  Fuel consumption is between 10 - 12 L / 100 km which is great for a car this size. The steering is quite light, which means there is less confidence in pushing the car in hard corners. The Impala also didn’t provide that head pinning acceleration when you put your right foot down. Another major issue with the Impala was the loud road noise that can be heard in the cabin and the extra weight over humps due to the massive 20” wheels. Looks like those wheels aren’t such a practical choice after all; at least not in a premium luxury sedan.

The Avalon, on the other hand had a smaller 3.5 litre V6 engine that packed in 273 horsepower and 346 Nm of torque. Though the Avalon had over 30 horses less, it felt quicker while accelerating and offered a more engaging drive with its option of Eco, Normal and Sport driving modes. With McPherson strut suspension in front and rear, the drive was noticeably premium. Unlike the Impala, you didn't feel bumps too much (thanks to smaller wheels), it was a very luxurious drive. Avalon also matched the Impala in the fuel consumption department with 11 L / 100 km. Moreover the road noise was significantly lesser than the Impala, although it could still do better to minimize it. The Avalon clearly is meant for a luxurious drive, not a sporty one, even though it has a Sport mode. Compared to the Impala, despite less power, it still offers a superior drive. 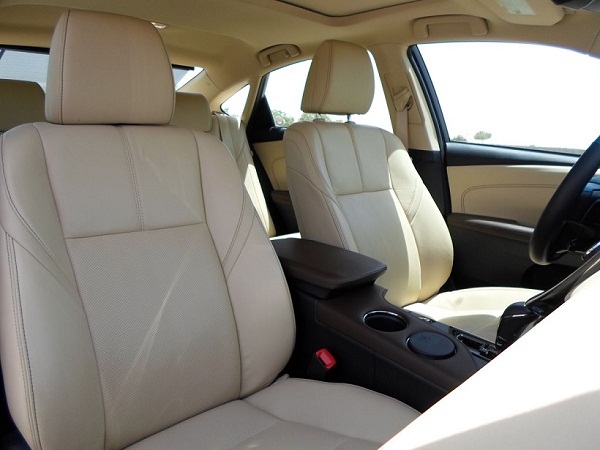 The Impala is definitely very luxurious, at first glance. The seats are soft and our test car even came with nice woody brown and black leather interior which did look a treat. On the downside, the switches for the A/C and radio controls, along with the instrument cluster were reminiscent to the ones that date back to the 1990’s. The steering wheel wasn’t very pleasant to look at either, especially not with that colossal chrome strip along the centre.

Once you open the door to the Avalon though, you instantly feel like you’re entering something premium. Our test car came with a beige, brown and black leather combination which did look fine and the added wood trim looks really, really good. There is a LOT of leather, especially in the top trim. The design of the interior, along with the feel, really makes you feel like you’re sitting in a Lexus.

While both models have premium equipment, overall the finishing and quality of materials used give Avalon an edge over the Impala.

The Impala packed in an impressive amount of kit. For instance, it had a panoramic roof, lane departure warning system and a blind spot monitoring system, none of which could be found in an Avalon. The Impala also had a very impressive valet mode whereby the infotainment screen would rise up and a secret storage compartment would open up. This could then only be opened after entering the correct unlock code. On the downside, the Bose sound system didn’t sound as nice as we’d expected and the crash warning system was such a distraction that it almost guaranteed a crash!

Compared to the Impala, the Avalon really pales in comparison. It feels underequipped and there isn’t any sign of innovativeness apart from the capacitive touch controls for the radio and A/C. The sensors attached to the front bumper are ear-piercing loud when they beep and the worst part is they go off sometimes for seemingly no reason! The saving grace for the Avalon though is the 11 speaker JBL sound system and the mood lighting system.

You could expect to get your hand on the top of the line Chevrolet Impala with all the fancy gadgetry for AED 129,000. However, the Avalon will burn a much larger hole in your wallet since the top of the line model costs an eye watering AED 154,000!

Both Chevrolet Impala and Toyota Avalon are catering to a segment of buyers who want luxury at a value price. For it's price, the Impala offers a lot more technology, much better styling and a decent drive. On the other hand, the Avalon truly offers premium flagship FEEL both from the quality of interior and from the smoother driving experience. Yes, it costs over 20% more. Yes, it has lesser options than the Impala. However, if it's flagship luxury you're looking for, such as premium quality interior, premium drive feel, the Avalon has a clear edge, which is what most buyers in this segment look for.