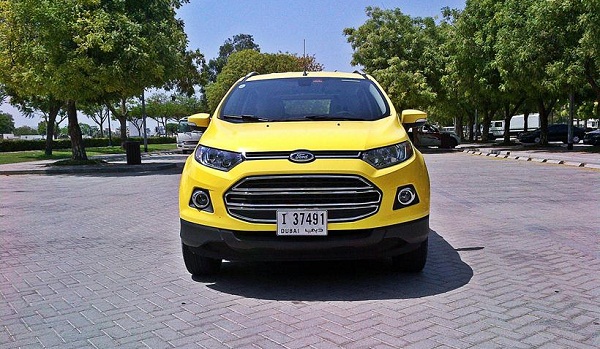 Ford EcoSport is a best selling model in Brazil, Venezuela, Argentina and Mexico. In other words, places where roads are mostly small, terrain is mostly uneven and high power is not really a priority. Middle East is a complete opposite of that market. So why is Ford EcoSport even here? Mostly because models like Renault Duster have sold so well. It's the 'Cheap N Cheerful' segment that Ford wants to exploit. We took it for a drive and this is our two cents: 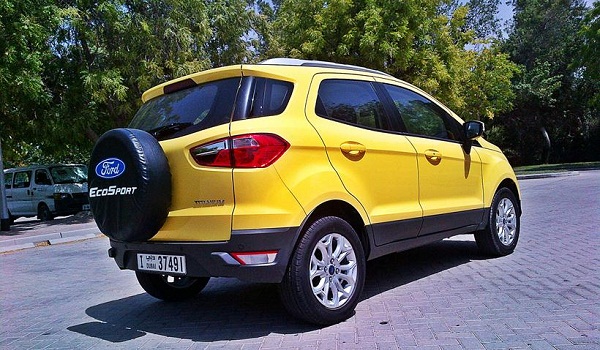 Probably the best thing about Ford EcoSport. It is less boxy compared to the Duster. The Titanium version we drove comes with front and rear fog lamps, silver roof rails and chrome style upper grille. There's even a high mount center stop lamp, not to mention towing loops in the rear. The 16 inch alloys get a funky design. The exterior color though is not to my liking, though I did get a "Wooow you got a Yellow Jeep" remark from a female drive through attendant. Not sure if that was genuine or sarcasm. 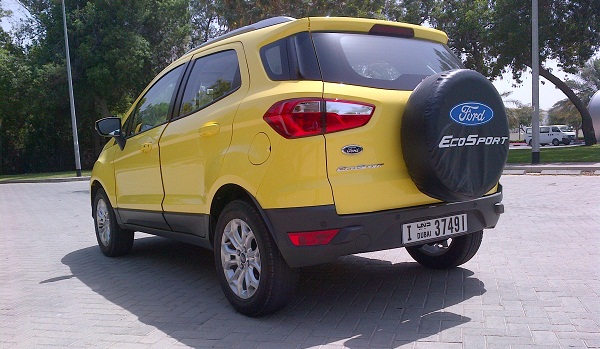 My biggest issue with Ford EcoSport. The build quality is below par compared with similar peers in it's segment. If you notice the front door to be slightly open in the picture above, this is due to poor build quality. You literally need to bang the door shut, otherwise it stays slightly open, which is actually annoying. I recommend upgrading the build quality as the first improvement to the next EcoSport. 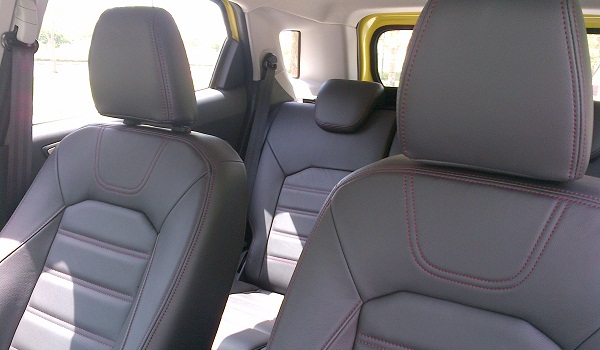 Nothing major to expect here, it's the economy segment after all. The seats are the only redeeming feature, coming with a nice sporty design and stitch. The Titanium trim features leather seats (although they don't really feel like leather). Other than that, expect hard plastics pretty much everywhere. This is expected due to the low price tag. 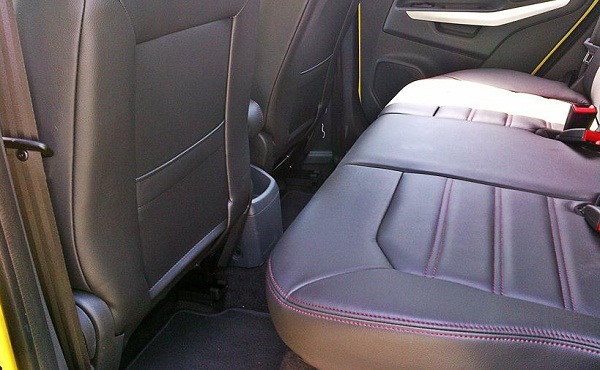 Not bad. It's got enough room to fit 5 adults. The visibility is quite bearable too. The boot space is actually more than Renault Duster (see specs comparison). Still, if you really have luggage to store, you'll have to fold the seats down (see boot space picture below), which thankfully come with 60:40 split. The interior space could have been enhanced by some clever ergonomic design though. There are some areas in front where a glove box could have existed, yet it's just left there with no purpose. The cupholders are way too low, so much so that you need to double check before putting a glass of beverage, just to be sure you're putting it in the right space. 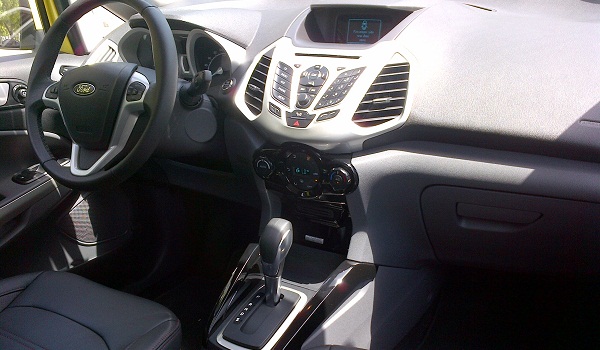 Unlike the top spec Duster, the Titanium EcoSport comes with 6 airbags, Automatic AC and 6 speakers. More importantly, it comes with cruise control. The infotainment system is powered by Microsoft and audio controls on steering are quite unintuitive. The Titanium also comes with iPod and USB functionality. The biggest issue is with seat controls. The seat controls are manual and very unwieldy to operate. It's best to just set them once and use them for the rest of your life! 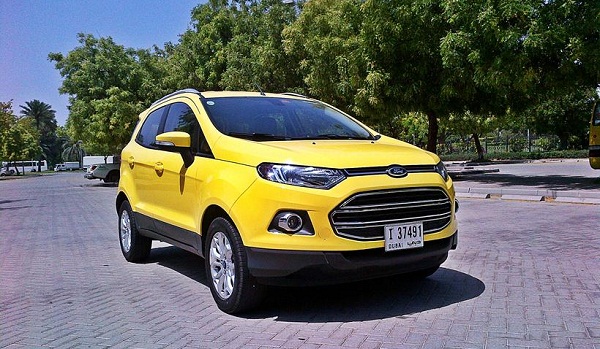 The EcoSport was originally created to serve the South American markets of Brazil, Argentina, Venezuela and Mexico. Now manufactured in India, the EcoSport still is a car with driving qualities suited to these markets. Markets like UAE, Saudi Arabia and Qatar have large highways that prefer bigger and stronger engines. The EcoSport comes with a very weak 1.5 liter engine mated to a 6 speed automatic transmission similar to the Duster, with similar power and torque of 110 PS and 142 Nm. Coupled with higher than normal ground clearance creates lots of body roll and struggles even in urban driving situations. I remember a vivid image of the EcoSport at 5,000 RPM barely crossing 80 km / h speed. So there was no point in even checking 0-100 km acceleration or 100-0 braking. Keeping all this in mind, what is the point of having a Sports Mode?! Yes, the EcoSport has a Sport gear in case the Drive gear is not to your fancy. It's completely useless. The car is quite underpowered and needs an engine upgrade to at least a 2.0, similar to Hyundai Tucson which we reviewed last year. There are two redeeming features. First, the higher ground clearance helps in treading uneven terrain and gravel roads. This is comparable with Duster. Secondly, the cruise control also does help, so on highways you can take a bit of rest and take your foot off the pedal.

Starting at 60,000 AED (roughly $16,350 USD), the EcoSport is slightly better in terms of interior features than the Duster but priced higher too. Both cars are underpowered and not very pleasant to drive. Another good option to consider is the Hyundai Tucson 2.0 AWD, which has more power and priced quite competitively. Consider the EcoSport only if you want a cheap, nice looking car to drive for short trips in the city.