The all-new 2019 Toyota RAV4 is the kind of car that appeals to small families and buyers of the Honda CR-V, Mazda CX-5, and Nissan X-Trail. An interesting fact is that while the ‘R.A.V.’ part of its name stood for ‘Recreational Activity Vehicle’ for the past 25 years, Toyota thought it was time for a change, and so, it is now an acronym for ‘Robust Accurate Vehicle’…whatever that means. 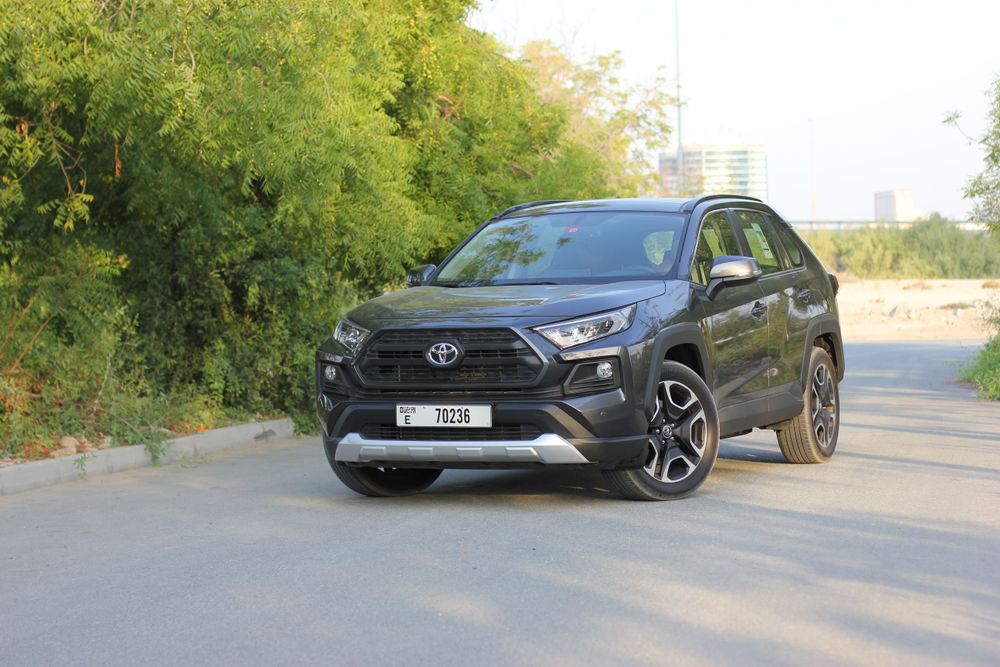 The all-new RAV4 is a big improvement over the older model and the car pictured above (the Adventure trim) which is the full-option model in the UAE, gets a few interesting upgrades. For starters, the Adventure trim gets a unique black grille as opposed to a chrome grille on the standard car. Secondly, it gets chunkier bumper guards on the front and rear bumpers. Thirdly, it gets 19-inch alloy wheels which are the biggest wheels available in the RAV4 line-up. And lastly, it gets prominent fender flares which give it an outdoorsy look to match its adventurous name. 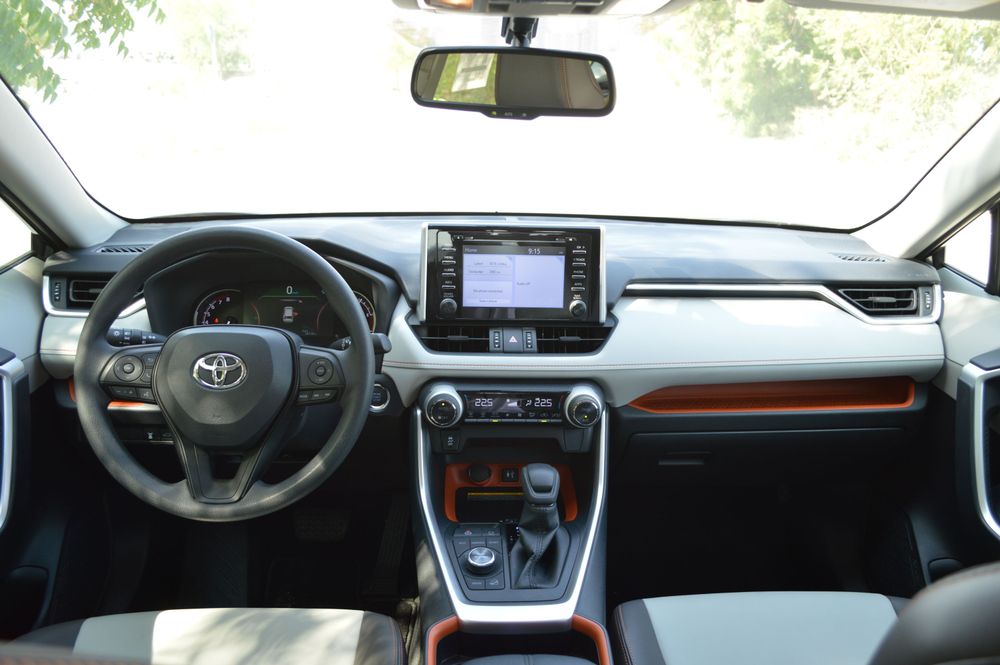 Continuing the uniqueness on the inside, the RAV4 Adventure is filled with plenty of cheerful colors. There’s two-tone leather on the seats, two-tone leather on the dashboard, and funky orange trim highlighting certain elements around the cabin giving it a very bright and youthful feel. The design is also very simple and uncluttered with large rubberized rotary controls and buttons placed exactly where you’d need them to be.

However, while the color scheme and design are great, the materials could be better. Although Toyota’s tried using rubber and covering some parts of the dashboard with leather, there is still a lot of exposed hard plastic. The door panels feel hollow and the sun visors create a horrific plastic-slapping-plastic sound whenever they are folded away.

Having lowered the hip point in the new model, it is a lot easier to get into and out of the backseats and since you sit lower, there’s also plenty more headroom. Legroom matches the best in class and to ensure those in the back are comfortable, there’s rear A/C vents, cupholders, and USB charging ports as well.

Being a family SUV, boot space is an important number and at 580-liters behind the second row, the all-new RAV4 offers more than the Honda CR-V, Mazda CX-5, and Nissan X-Trail. But that’s not all, because the boot in the RAV4 is very special. It offers under floor storage, a 12V outlet if you wish to connect an auxiliary cool box and keep drinks cool on a long road trip, and speaking of road trips, it also offers a really cool reversible floor with carpet on one side and easy to clean plastic on the other. 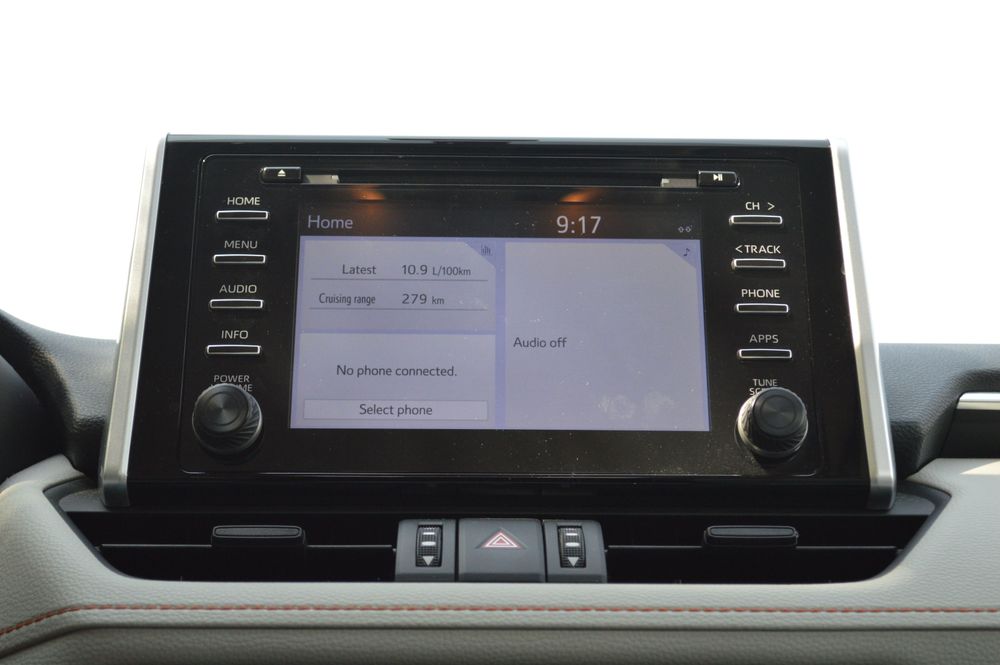 With the Adventure model being the full-option model in the UAE, it gets a long list of comfort and entertainment features. While there are basics such a power-adjustable driver’s seat, push button start, dual zone air-conditioning system, wireless charging and panoramic roof, it does get a few cool additions.

But not all is great. The 7-inch infotainment screen that sits on top of the dashboard is small by today’s standards and is also a little slow to respond. Unlike its newer rivals, the RAV4 doesn’t get Android Auto or Apple CarPlay, which is surprising, but it does get Miracast. For those of you who know what Miracast is, you’re probably saying WOW, and for those who don’t, let me explain.

Miracast basically allows you to cast (or project) any screen from your phone onto the 7-inch infotainment screen in the car. Facebook, YouTube, Tinder, WhatsApp, Google Maps, literally any app can be projected from your phone onto the infotainment screen wirelessly. Intelligent, right? Very intelligent, in fact, since this Adventure edition doesn’t come with built-in navigation and you can just mirror Google Maps…until you start moving.

You see, Miracast only works when the car is at a standstill, meaning if you did decided to mirror Google Maps and drive along, you’d have to keep stopping to check if you were on the right road or if you had just bypassed your exit. Suddenly, it doesn’t sound very intelligent… 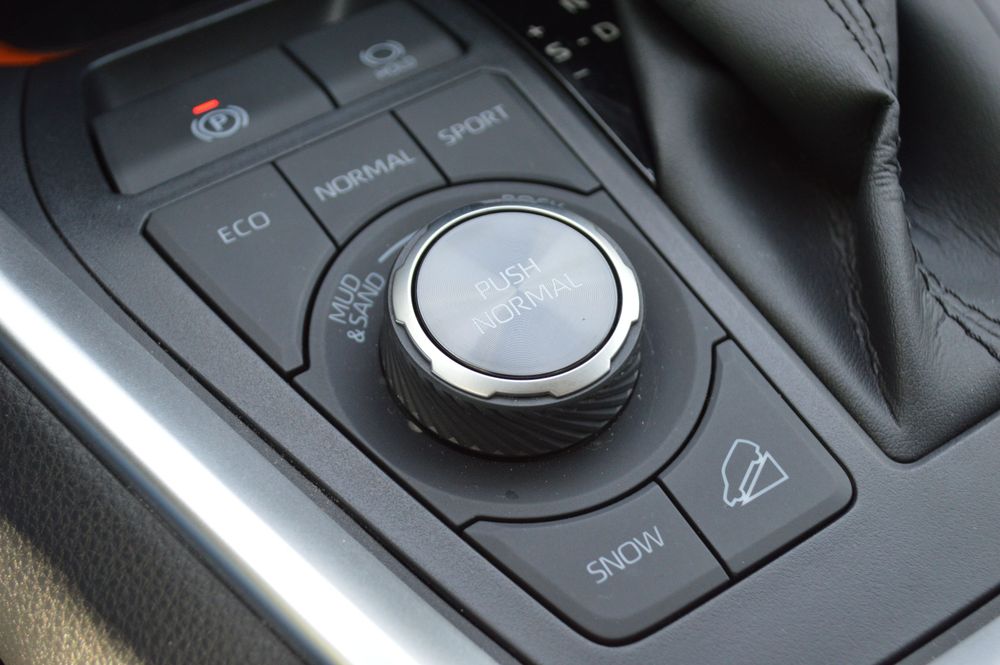 Making up for its shortcomings on the feature front, the all-new RAV4 packs a 2.5-liter naturally aspirated 4-cylinder engine under the hood. It produces 203 horsepower, which is a lot more than any of its rivals, and 242 Nm of torque, which is more than the X-Trail but less than the CR-V and CX-5.

Interestingly enough, the RAV4 Adventure sends its power through an 8-speed automatic transmission and has a full-time 4-wheel drive system much like its elder siblings, the Prado and Land Cruiser. To keep up with bigger and more capable SUVs in the market, the RAV4 also comes with 3 drive modes (Eco, Normal, Sport) and 2 Multi-Terrain Modes.

Since the RAV4 hasn’t got any locking differentials, a bunch of sensors work together with the transmission and engine to limit wheel spin and send power to the wheels with the most traction. Essentially, whether you’re driving in Mud & Sand or Rock & Dirt mode, the car calculates how much power is needed and distributes it to the wheels accordingly.

While the RAV4 could arguably be the most capable amongst its rivals off the beaten path, it is on tarmac that it continues to shine. With a 55-liter fuel tank, the RAV4 averages 10.5-liters for every 100km, and what that figure means is that it’s very, very, very fuel efficient. In fact, the tiny sips it takes out of the fuel tank is by far its best feature. 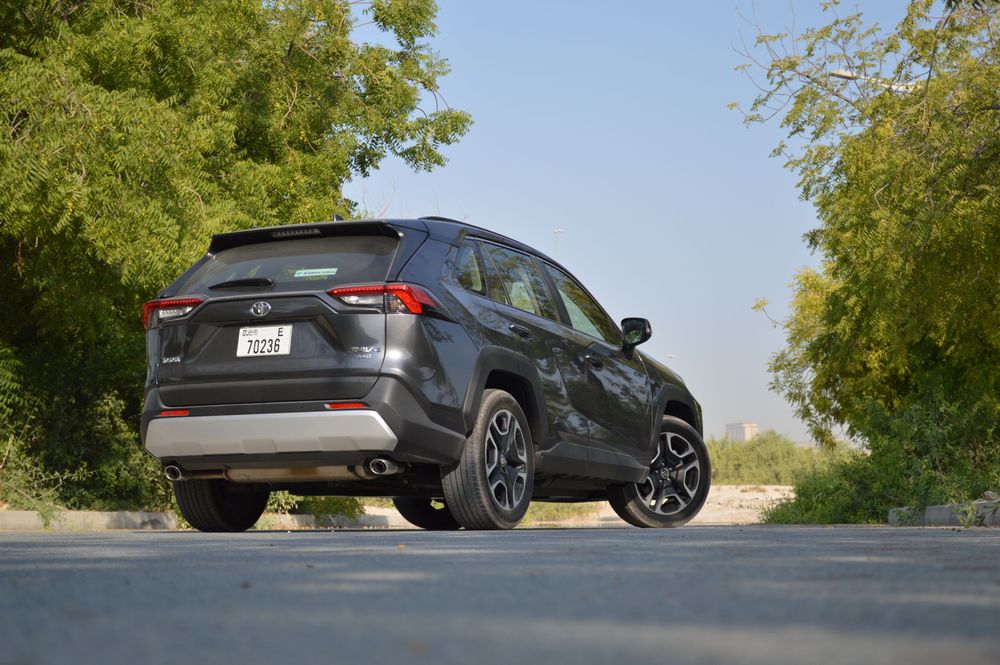 The Toyota RAV4 has come a long way in the past 25 years and continues to be an important name in the segment that it competes in. This all-new model wears a starting price of 99,000 Dirhams with the full-option Adventure model coming in at 129,900 Dirhams in the UAE.