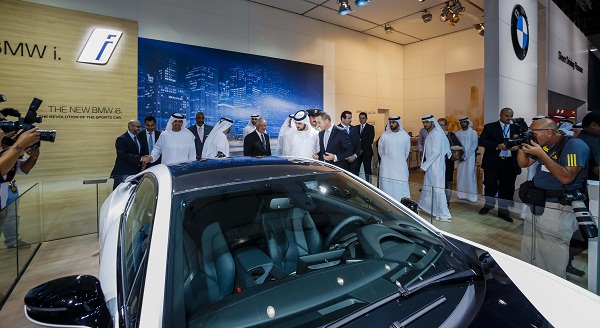 Stealing the limelight was the BMW i8 sports car that combines a plug-in hybrid drive system also with a passenger cell made from carbon-fibre-reinforced-plastic and an aluminium frame for the combustion engine and electric motor, the battery pack and suspension.  With this revolutionary concept, aesthetic appeal and aerodynamically optimised body design, the 2+2-seater will pave the way for an engaging, dynamic and futuristic take on BMW’s hallmark driving pleasure, when its launched in Q2 2014.

Also making its Middle East debut at the Motor Show was the BMW 760Li V12 M Bi-Turbo, which is expected to further enhance the appeal of the 7 Series model.  The BMW 760Li V12 M Bi-Turbo has been created exclusively for the Middle East region and is the first 7 Series ever to wear the high performance M badge and be available with unique M design, colour and trim features.

BMW also offered a preview of the future of the BMW X family in the form of the new BMW Concept X4. Taking no more than a glance, customers were able to see how successfully the qualities of a BMW X model blend with the genes of a BMW Coupé. Building on the success story of the BMW X6, the new Sports Activity Coupé concept is poised to establish a new vehicle class when it's launched in Q3 2014. 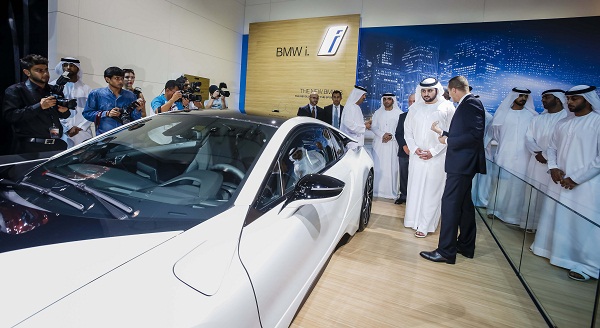 Continuing to set new industry standards in its segment,  the third generation model of the world's most successful Sports Activity Vehicle – the BMW X5 – was also a main highlight on the BMW stand.  The all-new X5 is currently on sale across the Middle East and includes many new features that enhance the luxury and comfort experience dramatically.

Meanwhile, a new chapter in the history of elegantly sporty, two-door BMWs began with the BMW 4 Series Coupé. The 4 Series Coupé has a stretched coupé silhouette and is considerably lower to the road than the 3 Series Coupé giving the car an even sportier look.

Also on show was the BMW 3 Series Sedan and the recently launched BMW 3 Series Gran Turismo. Opening up a new dimension of dynamics with impressively powerful engines from BMW’s M Performance and M Division was the BMW M135i, BMW M5 Sedan with the new Competition Package as well as the BMW M6 Gran Coupé.

The BMW Z4, which represents an alluringly contemporary interpretation of the traditional roadster concept, was also presented.

The array of BMW models showcased at the 2013 Dubai International Motor Show put BMW in pole position in the premium automotive segment and paves the way for future mobility.