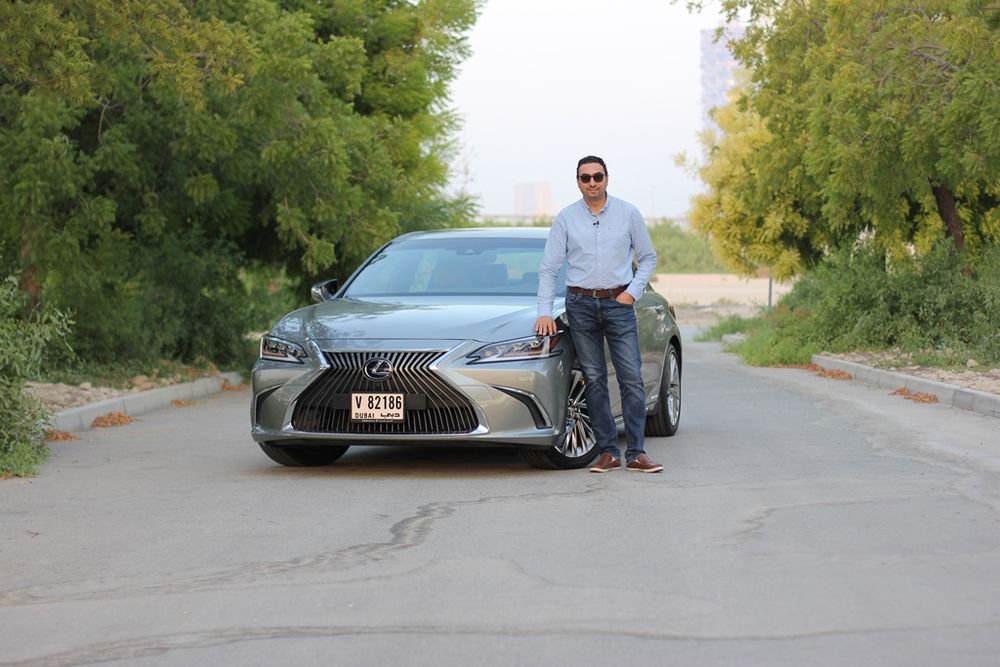 With the Lexus ES being used as a taxi by both Uber and Careem in the UAE, it’s had two very important effects on the model and possibly the brand too. Firstly, it’s ensured higher sales for the brand, but it’s done so at the cost of public perception. What I mean by that is, ask yourself a very important question: would you buy a new ES, and more so, do you still link the ES nameplate with Japanese luxury?

The Lexus ES is a mid-size luxury sedan that has long been considered the pocket-friendly alternative to the Audi A6, BMW 5-Series, and Mercedes-Benz E-Class. In our market, it also competes with the likes of the Infiniti Q70 and the Genesis G80. 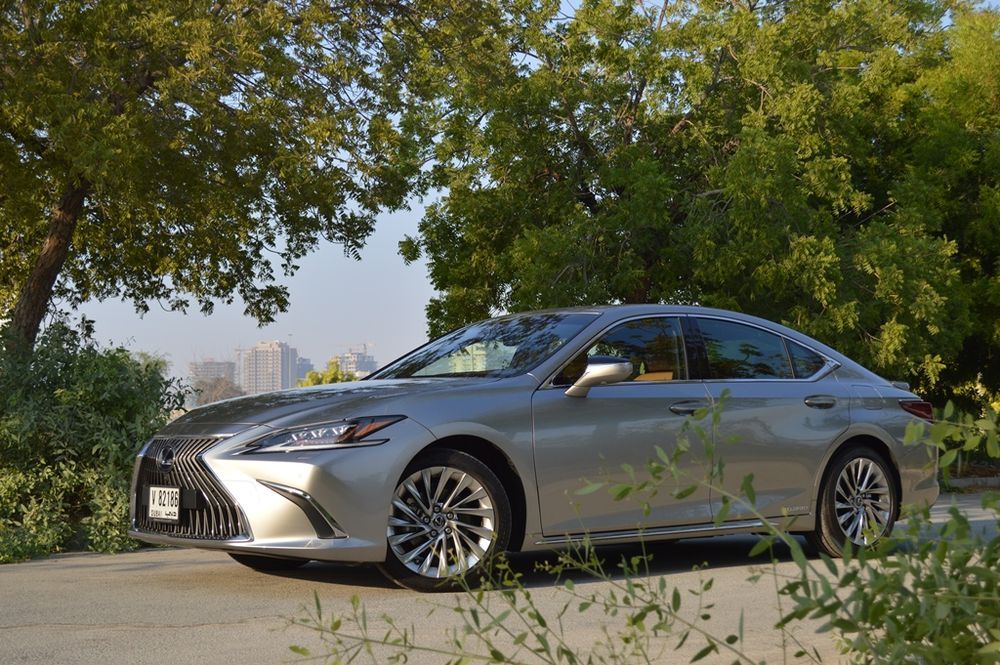 Compared to the model it replaces, the all-new Lexus ES has become wider and taller. Since it follows the brand’s new design language, it also gets a much larger spindle grille with the chrome slats differentiating one version from the other. For instance, the standard ES350 comes with crossed lines whereas the ES300h (hybrid) we have with us today comes with straight lines on the grille and blue coloring on the logo.

The full-option model we have with us comes with three LED headlamp sets and a unique L-shaped Daytime Running Light (DRL) that distinguishes this model from its competitors. The lines on the car are all strong and clear, and the roof has a more aggrieve slope to it, adding a dash of sportiness. The ES300h comes with 18-inch alloy wheels and was designed to reduce tire noise so that those within the cabin remain comfortable at all times. 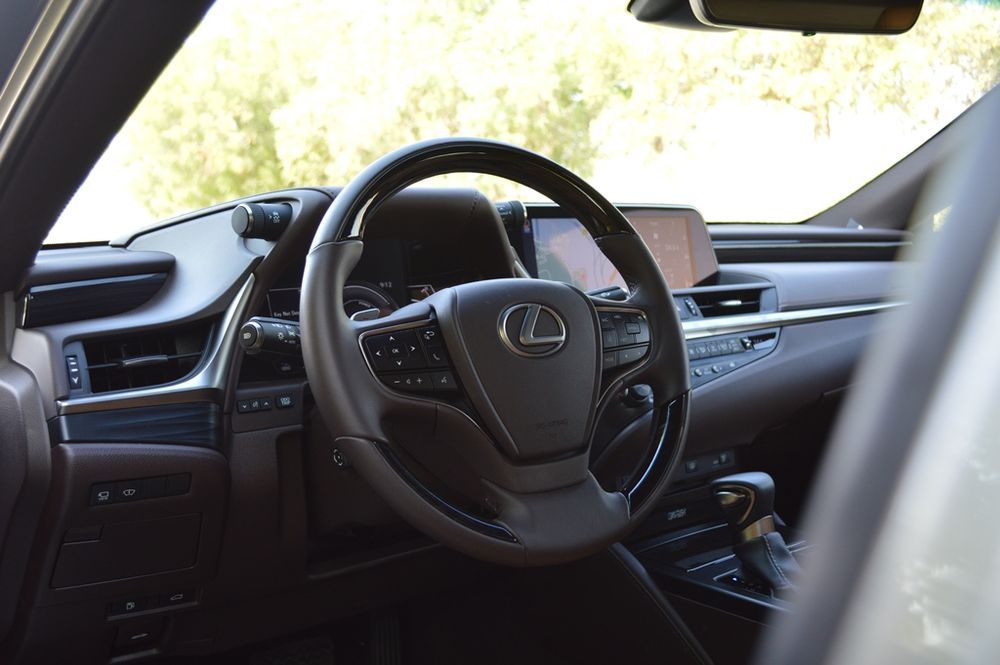 The interior is now far more elegant than the previous model. It comes with two large screens, one for the digital instrument cluster and the other for the infotainment system. A noticeable change is that the clock has been moved from the center of the dashboard to besides the infotainment screen to keep within eyelevel of the driver’s vision. In addition, there are several buttons on the steering wheel that allow the driver to control numerous functions such as the audio system, Bluetooth telephony, cruise control, etc.

As for the materials used around the cabin, the ES is built exceptionally well with plenty of soft leather all around. The fact that it’s stitched leather atop the dashboard adds to its luxurious feeling, with plastic restricted to the lower parts of the cabin. Having said that, the ES does flaunt more exposed plastic than we could find in its German rivals that sit in the same segment. 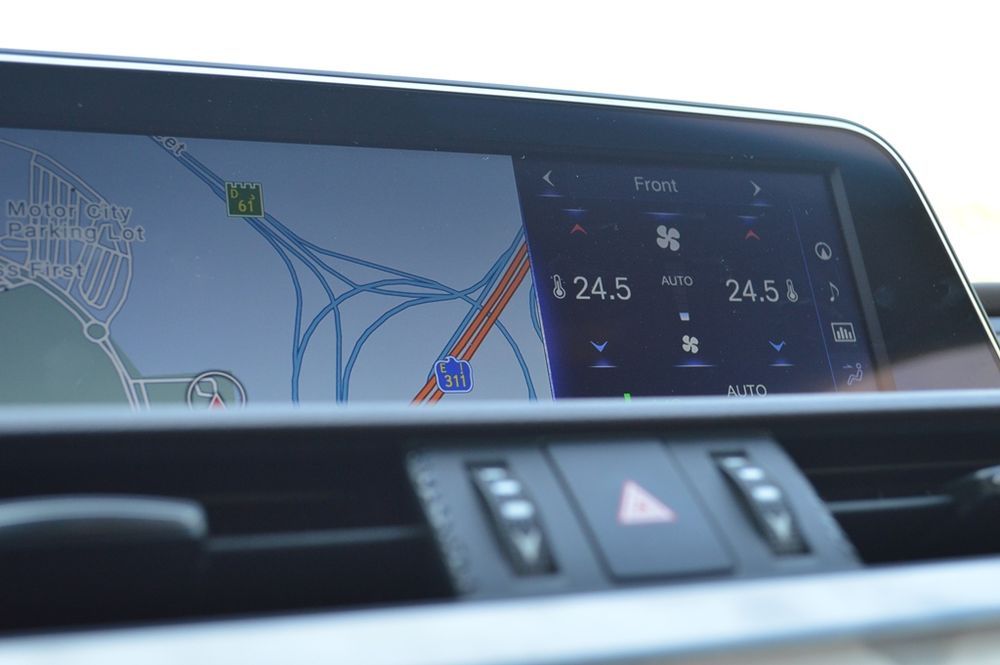 As mentioned earlier, the all-new ES comes with two screens. The instrument cluster display, which comes with interchangeable themes, can be customized with the buttons on the steering wheel. The other screen which is larger at 12.3-inches, is the infotainment screen and is controlled from a touch panel at the bottom of the center console, making it easy to control while driving. In addition, it comes with navigation, Bluetooth mobile connectivity, and 17 speakers from Mark Levinson. This screen also allows you to divide it to show you two different sets of information and can be used to control the tri-zone climate control system.

For safety and driving assistance, the ES 300h Platinum offers a cruise control with radar, lane departure warning system, a blind spot monitor and pre-collision system. The cameras and sensors around the car provide a 360-degree view, either with the Bird Eye View from the top, or viewing a 3D scene around the car as if you are looking at it from the outside. It also come with a rear cross-traffic alert to stop you for hitting a car or pedestrian while reversing out of a parking space. 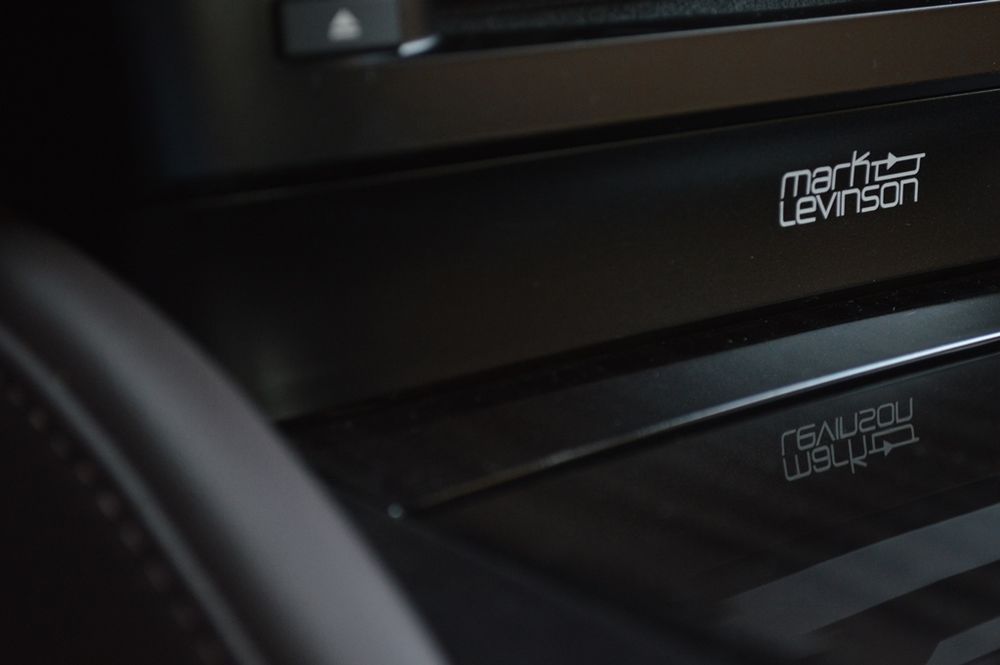 Speaking of attention to details, Lexus has taken special care by providing driver-side buttons for the passenger seat so that you can adjust the position of the seat in case there was a child or an elder. There are also two USB ports and cup holders behind the gear stick. 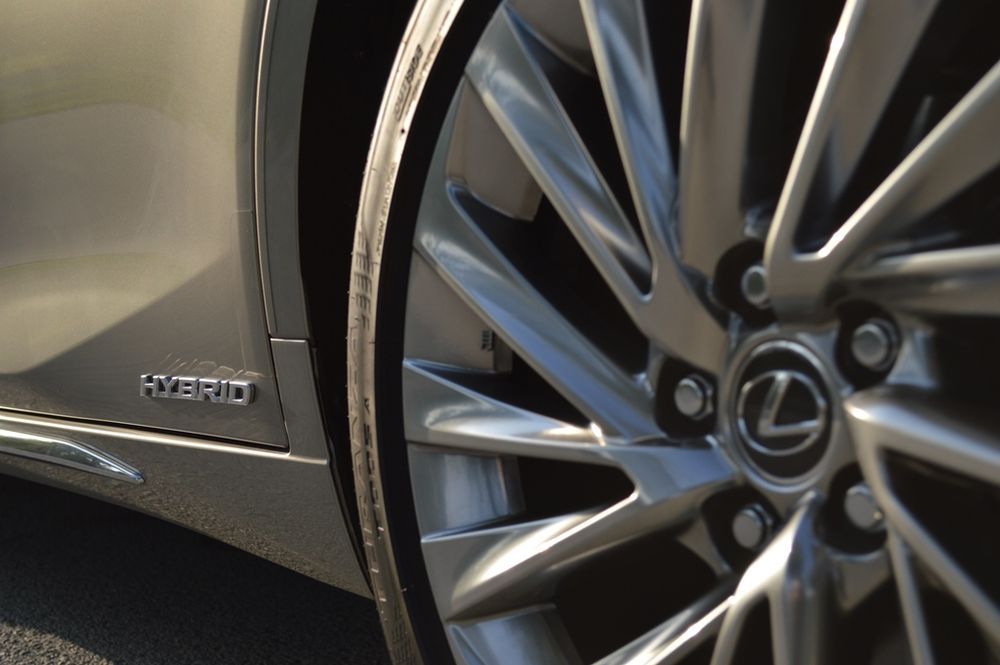 The Lexus ES comes with different engine options; it comes with a 2.5-liter 4-cylinder engine for the standard version, while the Lexus ES350 has a 3.5-liter V6 engine and generates 300 hp. The hybrid ES300h gets a 2.5-liter engine along with an electric motor. The combined output of the engine and electric motor is 215 horsepower, which is enough to allow the ES to accelerate to 100km/h in 8.3-seconds.

This combination of a gasoline engine and electric motor provides good fuel economy. After driving for five days inside the city, I noticed a fuel consumption of 7.2 liters / 100 km - a great number for a car of this size.

The most important thing to get to your attention while driving the ES300h is the quietness you get inside the cabin. Lexus has taken care of this through a variety of ways to make driving very quiet especially with the noise reduction system, which uses a microphone that is placed at the top to pick up any noise and then generate opposite sound vibrations to get the highest level of quietness inside the cabin. 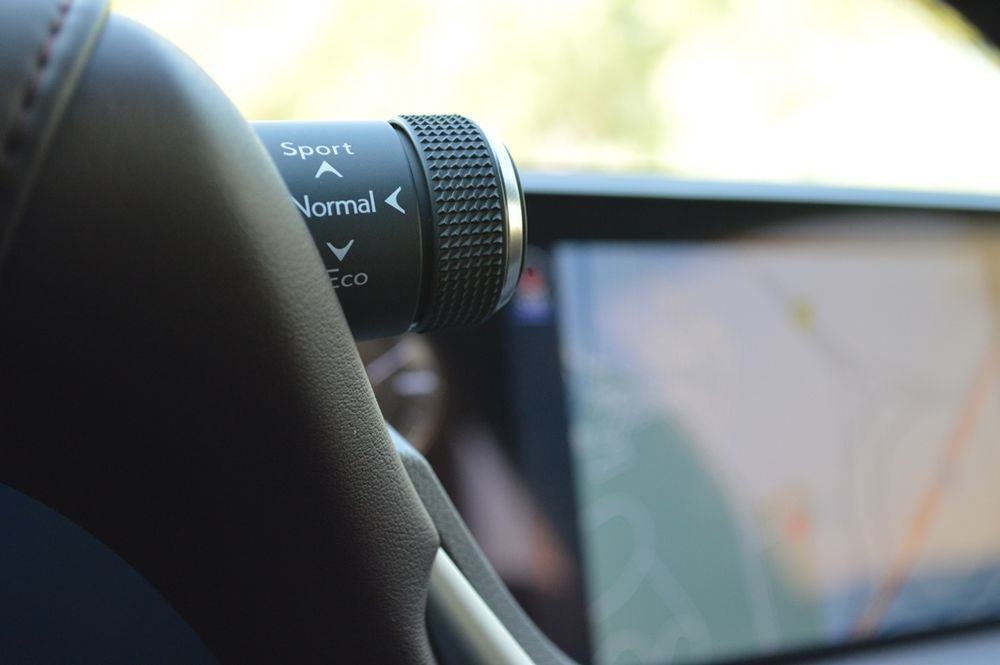 As for the suspension, Lexus has equipped the ES with a smart system that reads the state of the road and reduces the sense of any bumps and twists, while minimizing body roll. The ES is equipped with a high-precision steering wheel, especially when it is driven in sport mode, which is one of the three modes along with Normal and Eco. 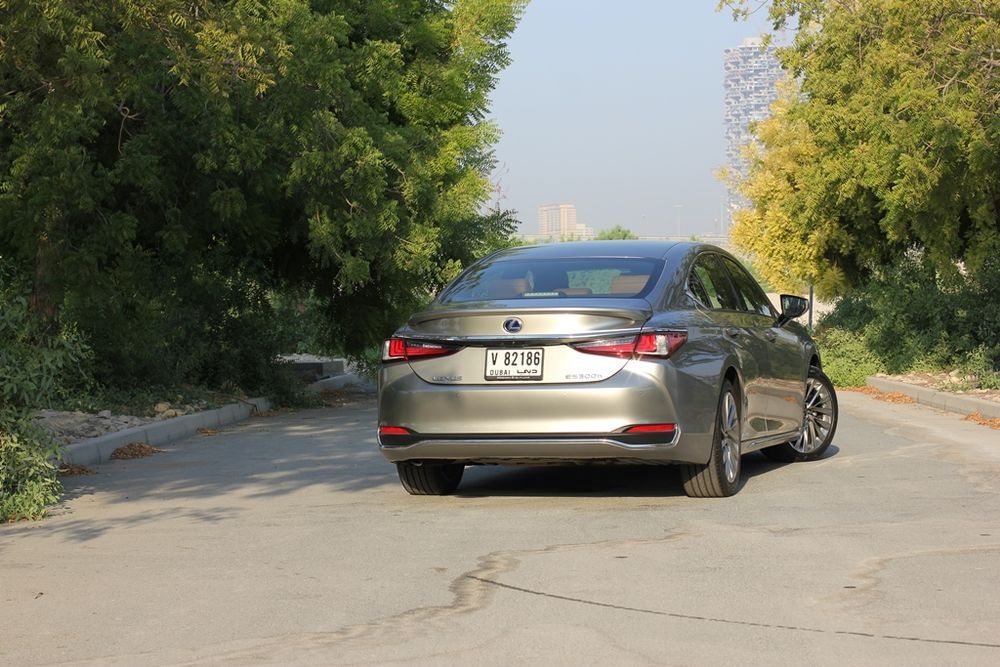 In the end, I return to my first question, will the new ES be able to change people's perception of it as a taxi here in the UAE with this new model?